An Accident and a Lesson

In a career of 15 years I have investigated a lot of avalanches. The most interesting ones are unintentionally triggered and are intriguing because they usually involve a series of decision-making failures only obvious in hindsight. This winter has been rich in such experiences. Folks have triggered many avalanches and a few have been caught and one died. Over President’s weekend three skiers were in an avalanche they triggered while skinning up Beehive Basin to the north of Big Sky. Small mistakes stacked up to create a potentially deadly situation. All too often my avalanche accident investigations involve a fatality. This accident ended with a rescue and only minor injuries. Although terrifying and sobering for those involved, I am excited about the possibility to learn and pass along the lessons to others. Avalanches involving buried skiers that don’t end tragically are rare and, to an avalanche educator, a gift.

In the four days prior to the avalanche almost one and a half feet of snow fell in the area (1.3” of water equivalency) with strong west to southwest winds. The avalanche danger was rated considerable on all steep slopes, meaning a skier would likely trigger a slide. The party consisted of a husband and wife and a male friend (ages 37, 35 and 40) who knew the avalanche danger. They were skilled, had taken avalanche classes and carried proper rescue gear. The day was partly cloudy, 20 degrees and perfect for a low-angled tour. Dozens of other skiers thought so too and the parking lot filled early.

Their goal was to climb the west side of Beehive Basin to the ridge that separates Middle Basin. This is a popular tour and a proper uphill track can avoid avalanche terrain on the ascent. Usually the track is set and trampled in, but not this day. They had been there years prior and could not remember the exact location of the uphill route. Wind had filled in the track and they were unsure if they had already skied by it. They could see the ridge above them and decided to ski a low rising traverse towards it. The decision made sense at the time but was the first small step on a fateful trajectory.

They plodded up toward the ridge through trees on terrain which they believed would not avalanche. The terrain got progressively steeper and they felt ok. The husband was breaking trail, his friend 50 feet behind and his wife 20-30 feet behind his friend. They were spread out and everything looked good to them, but it was not. They were in avalanche terrain and did not know it.

It is common for skiers to think that avalanches cannot happen on slopes with trees. They think that trees are anchors and add strength to a slope, like rebar in cement. This can be true, but only on slopes with enough trees to inhibit linking turns; trees so thick that you cannot ski through them. This slope had plenty of trees spaced far enough apart that skiing through them would be tight but enjoyable. Their assumptions about trees fooled them into thinking they were safe even as the slope steepened.

The husband noticed the steepening terrain. He did not know the exact steepness, but the slope angle was greater than 35 degrees as he took a few steps out into a small clearing. The slope rose to 40 degrees steepness 100 feet higher where the avalanche eventually fractured. The snowpack was unstable, hence the considerable danger rating. Two feet under the snow surface was a layer of weak snow formed during the latter half of January. The snow was precariously supported this day. Recent snowfall and wind-loading on lower elevation slopes exacerbated the hazard. A false sense of security because of the trees, a steep opening on the slope, a bad snowpack and considerable rating were the next four steps lining up to create an avalanche, which was not yet inevitable. Sometimes we make mistakes without triggering an avalanche. Many times we are blissfully unaware we made mistakes since everything worked; we obliviously had a close call but no avalanche, just a fun day out. We might even pat ourselves on the back for a job well done. But on this day there would be no pats.

The husband felt and heard a large collapse (whumph) of the snowpack and thought “this is getting sketchy”. This collapse is the sound of the weak layer failing and propagating outward. The poorly structured snowpack did not arrest the collapse. Instead, it broke freely to the top of the slope and avalanched. The husband’s thought of sketchiness was soon forgotten as he looked uphill just as the avalanche pummeled him. Luckily he was near a tree at the edge of the slope and was able to hang on for dear life.

The party was spaced and not bunched together, but they were not spaced far enough apart. They were all in the same avalanche path, a common mistake, especially while skinning uphill. The reason we put distance between skiers is so that only one person is caught in an avalanche. When multiple people are buried chances of survival go way down because rescuers cannot focus on just one person. It is more common for multiple skiers to be caught on the descent, but the snowpack doesn’t differentiate between ascent and descent. It just avalanches and sweeps anyone away in its path. In this incident the skiers were not aware they were in avalanche terrain, a costly mistake, so one error easily led to another.

While the husband hung on, his friend was swept away. At one point the friend was completely buried but popped out on the surface as the slide stopped, partially buried but uninjured. His wife was close to the edge or flank of the avalanche, but close isn’t good enough and she was swept away too. The back of her knee hit a small tree and she also hit her head and came to a rest with just her head above the snow. The husband could not see anyone. He switched his beacon to receive and did not get a signal because they were out of range. He started yelling and within a few moments they both yelled back. Everyone was alive.

The wife was banged up and could not ski out so they called 911. Big Sky Search and Rescue, run by the Gallatin Country Sheriff’s Department responded and rescued the party. Thankfully, the wife’s injuries were not serious.

I investigated the scene the following day. This experience, coupled with the group’s willingness to share their story, ended up being a valuable combination of learning lessons from the day. As I skied onto the debris I understood how they were fooled into thinking there were enough trees to inhibit an avalanche. There was no obvious avalanche path and there were many trees. A closer look showed that many of the trees were missing their uphill branches, a sign of past avalanche activity not obvious from where they entered the slope. If you believe you are not in avalanche terrain, as they did, then snowpack, weather, spacing and avalanche danger are all moot. Terrain trumps all, but as they found out you must be right in your assessment. 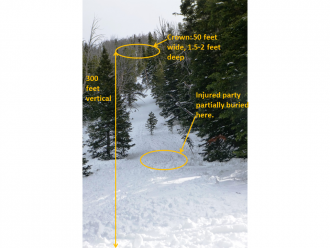 This photo is looking up the slope from the toe of the debris.