Good Morning. This is Mark Staples with the Gallatin National Forest Avalanche Advisory issued on Saturday, February 27, at 7:30 a.m.  Sweet Pea's Nursery, in cooperation with the Friends of the Avalanche Center, sponsor today's advisory.  This advisory does not apply to operating ski areas.

This morning temperatures were near 20 degrees F and winds were blowing 10-20 mph from the south; however, overnight these winds blew 20-30 mph near Big Sky.  Moisture will stream across the southern Rockies sending clouds and very little measurable precipitation to southwest Montana.  A few snowflakes will fall today mostly south of Bozeman with no more than 1 inch accumulating by tomorrow.  Today temperatures will rise to near 30 degrees F and winds will blow from the south at 10-20 mph.

The Bridger, Madison and Gallatin Ranges, the Lionhead area near West Yellowstone, the mountains around Cooke City and the Washburn Range:

During the past 7 days the mountains of southwest Montana received just enough snow to maintain good skiing and riding conditions.  This minimal snowfall has not stressed the snowpack and it has prevented the snow surface from becoming a future problem.  The weak layer of concern is buried about 1.5 ft deep and contains surface hoar on some slopes and near surface facets on others.  In most places this layer lacks sufficient stress to create an avalanche but strong westerly winds mid week and strong southerly winds overnight have formed shallow wind slabs that could push this layer to its breaking point.  Several small natural avalanches containing these wind slabs were observed near Big Sky yesterday, and another, 1.5 ft deep and 100ft wide, was triggered near Cooke City on Wednesday.  Fortunately these wind slabs do not seem to be widespread.

While skiing or riding today watch for any recently formed wind slabs and avoid them.  Dig several quick snowpits and evaluate the weak layer buried 1.5 ft deep.  Triggering an avalanche on this layer may cause a much larger avalanche potentially fracturing on a persistent layer of facets near the ground.  Despite a lack of significant stress, weak layers in the snowpack have not gone away and human triggered avalanches remain possible.  Today the avalanche danger is rated MODERATE.

Eric will issue the next advisory tomorrow morning at 7:30 a.m. If you get out in the backcountry let us know what you find.  You can reach us at 587-6984 or email us at mtavalanche@gmail.com. 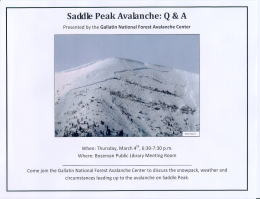