I would love to know how many sets of tracks were wiped out in Sunday’s avalanche of the Football Field on Saddle Peak. If you carved a set consider yourself lucky. I’m going to guess that not many snowpits were dug and that the only form of stability assessment folks leaned on were that others had skied it beforehand. This was not smart. The avalanche broke during early morning avalanche control on the boundary of Bridger Bowl. An explosive was placed in-bounds, but the avalanche ripped out-of-bounds. Why? Because the snowpack inside the ski area was beaten into submission throughout the winter by the ski patrol while the Football Field was not. And we know that a skier hitting a weak, thin area can release the same avalanche. Once again luck plays a part in why skiers didn’t Superman off the cliff in an avalanche and die. Saddle Peak is backcountry and deserves respect. Can you ski it sometimes? Sure. But where’s your data showing it’s a good idea? 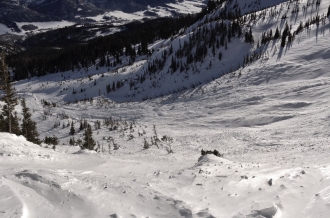 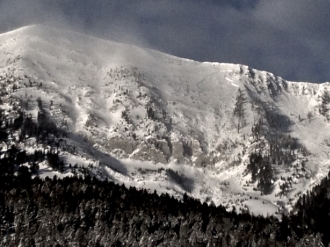