Bottom Line: The snowpack from Lionhead through the Bridger Range is shallow with a distinct layer of weak, depth hoar near the ground and a stripe of feathery surface hoar buried under 6-18" of snow. It will take weeks or months to trust these layers fully, but they are adjusting to the current load and avalanches are less likely. Stability is currently similar in these ranges but today's snowfall will heavily favor the mountains around West Yellowstone. As the snow begins to add up, stability will decrease.
Primary Problem: Persistent Weak Layer


From skier in Hyalite on 1/23/21: "I observed a couple older (1-2 week) naturals on E/ESE aspects in the Divide basin, and newer (1-3 days) naturals on the NE side of Divide and an east aspect at the head of the Maid of the Mist basin." 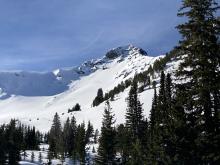 Maid of the Mist 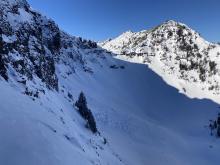 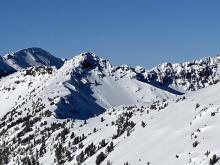 
A skier near Mt Blackmore obsersed two loose snow avalanches on the east face of Blackmore and a small slab avalanche on the north face. Continued active wind-loading.


From obs: "While ski touring in the Hyalite Creek Drainage today, my ski partner and I both, at separate times of the day, remote triggered sudden collapses. Each time, we felt the snow collapse underneath our feet, and then heard and felt a deep "whumph". The noise came from the North of us both times, where the slope was slightly steeper (still below about 28 degrees-- not colored with "slope angle shading" layer on caltopo.)." 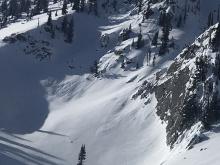