At 6:50 am on Thursday, November 5, 2015, two hunters were walking near the saddle of Sacajawea Peak after approaching from the Fairy Lake Trailhead on the east side of the Bridger Range. They were on the shoulder of the peak to the north (often referred to as Hardscrabble) at 9,000 feet elevation when they triggered an avalanche that broke 40-50 feet wide and 20 feet above them. They were carried 400 vertical feet (measured by their GPS) over a series of rocks (photo). One hunter was unconscious, but came to.  Although injured, they self-evacuated and drove to the emergency room where he was cleared of critical injuries. 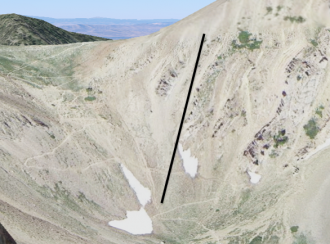 Two hunters triggered and were caught in a slide in Sacajewea Bowl yesterday (Thur, Nov