What a strange year it has been.  We started strong with many storms and early season snow, followed by spring weather in February and March and then one of the biggest snowfalls of the season yesterday. Go figure. Although skiing and snowmobiling conditions were bipolar, the snowpack was generally stable with more days of “Low” avalanche danger than any of us can remember.

This was our 25th season, a Silver Jubilee Anniversary year, which began with our first Avalanche Information bulletin on November 10 and followed by the first skier triggered avalanche on November 20. Daily Avalanche Advisories began with an Avalanche Warning the day before Thanksgiving, November 26, after three feet of snow fell in the mountains. That same day a snowmobiler was killed in an avalanche near Cooke City, the first avalanche fatality this season in the nation. On the last weekend of the season a skier died after a small avalanche pushed him over a cliff on Beehive Peak in the northern Madison Range. These two tragedies were bookends to a relatively quiet winter. We issued 140 daily avalanche advisories including six days of avalanche warnings.

Along with issuing avalanche advisories we also prioritize avalanche education.  Safety is the US Forest Service’s first priority for the National Recreation Program and we do our best to reach as many people as possible through our advisories and classes. This year, with help from the Friends of the Avalanche Center (FOAC), we taught a record number of courses.

Instead of using generic adjectives like more, most or many, I’ll put numbers to the relevant information regarding our work this season.

Mark, Eric and I rely on community partnerships and collaboration to run the Avalanche Center. Close to 40% of our funding comes from outside the Forest Service with Montana Fish, Wildlife and Parks and the Friends of the Avalanche Center (FOAC) filling in the shortfall. Business’ and individuals that support us through the FOAC include: Gallatin Motors, Cooke City Motorsports, the Yellowstone Club Community Foundation, Grizzly Outfitters, Mystery Ranch, Montana Ale Works, Community Food Coop, and Bridger Bowl. We are thankful to have such strong support.

We wish everyone a safe and enjoyable spring and summer. Come October we will start gearing up for next season which I’m forecasting to be epically deep. 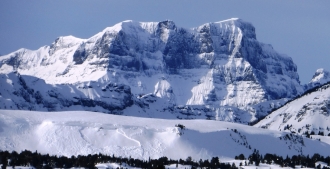