Additional Thoughts Regarding My Uncertainty Surrounding the Cooke City Snowpack

A large, 8-10’ deep avalanche on Woody Ridge outside of Cooke City yesterday (1/30) surprised me and is making me reexamine what I know – and what I don’t know – about the snowpack in the Cooke City area. I'm giving this zone a lot of thought because, depending on what the next storms do, we may be at the start of a significant avalanche cycle.

People digging pits are finding a layer of surface hoar 1-2 feet under the surface to be fairly widespread. All tests that I know of are showing ECTN on the layer and no one has reported propagation (update: ECTP23 on Wed.). There are many reasons why this may be the case (perhaps the surface hoar is too sparse; there may not enough of a load; the surface hoar might already be tilted or knocked over, etc.), but we do not have answers. The two remotely triggered avalanches reported over the weekend may have gone on this layer, but again, we don't know. I recommend to keep digging and testing it. Since it is already about 40 cm under the surface with a F to 4F slab on top, I'm surprised it's not reactive. One thought is there might not be enough of a slab on it. I'm leery of that explanation because I had a partner get partially buried in an avalanche 15 years ago when a Fist hardness slab of powder broke on a layer of surface hoar. The relationship between the weak layer and the slab is what we want to focus on. A slab touched by wind, or one that settled overnight, might change the relationship. These are things to keep in mind as we expose ourselves to avalanche terrain and as we hunt around for the surface hoar.

The avalanche on Woody is scary because Cooke has an untold number of slopes like this: wind-loaded, cross-loaded, monster paths. Every snowpack has a breaking point no matter how strong it might appear in our snowpits. Last year we witnessed this when 12" of SWE fell and we had a near-historic avalanche cycle. Maybe the slope on Woody got half its load in the past week from wind-loading and the scales tipped Monday night? Regardless, it broke on the ground where there are facets (are there ever not?), but even really strong, rounding facets can break with enough load. With more snow and wind in the immediate forecast I'm worried we'll see a few more large avalanches and there's no way to know which slope is next.

Leaving deep slabs out of the equation, wind-loaded slopes are my main concern in regards to likelihood of triggering. I am guessing this weekend skiers will continue to trigger wind slabs. Maybe they'll be on the surface hoar, but maybe not. It is not a necessary ingredient. I think that most people are a bit complacent about wind-loaded slopes and deem them "manageable", like the skier on Naya Nuki who ski cut a wind slab that broke above him and took him for an 800' ride. This is what I fear will kill someone soon.

As an avalanche forecaster I do not like uncertainty. Stopping, thinking, re-examining the data, and talking to other professionals are ways to minimize it, as is writing about it. Pulling back and being conservative in my assessments are a natural reaction during these times. If the past is any clue, Mother Nature will show her hand soon enough. 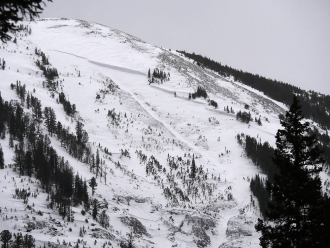 This avalanche released Monday night on a northwest facing slope (9,700') at the north end