Chris Lundy, owner of Sawtooth Mountain Guides, wrote a great article in Backcountry Magazine about digging pits. He opens the story with a personal account of triggering an avalanche. I was with him that day. We triggered the slide up Fisher Creek outside Cooke City on March 10, 2002.

The attached picture is Chris standing at the crown minutes after we triggered the slide, but still minutes away from cleaning our drawers. It released on a 37 deg rollover.  That day it already snowed 8 inches in last 24 hours and was still snowing, blowing and forming pillows. There was a buried facet layer, and we did a Stuffblock Test and got SB40, Q1. Stupidly, I thought we could ski it.  The slope broke 3 feet deep, 75-100 feet wide and ran 650 feet vertical and put 6-10 feet of debris at the toe. We were lucky.

Yup, I was the avalanche forecaster with Chris that day in 2003 when we triggered the slide. I remember it well and it changed the way I did business from that day forward. Dumb mistake. I used the stability test to confirm stability, a big no-no, especially since there were other signs that things were not ok…like rapid loading and a buried weak layer.

Snowpit tests are only good for showing us instability, not vice-versa. Before dropping in we have to know what’s under our feet, and that requires putting a shovel in the snow and testing it, just like Chris suggests.

As an important side note, the ECT and CT stability tests are not affected by slope angle, so you do not need to get onto steep slopes to see if things are unstable.

2002: Lundy at the crown of an avalanche 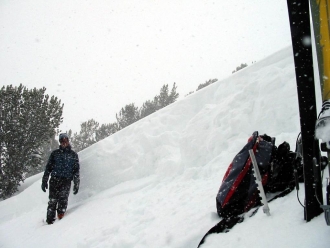