Put Your Shovel In The Snow!

Published in the Dec 2014 Carve

This simple act could save your life. Pausing to assemble your shovel and dig a few scoops can sometimes reveal a hidden but, once exposed, obvious weak layer. Taking a few more minutes to perform an Extended Column Test (ECT) may give you strong evidence of unstable slopes. When conditions seem good most people have already made their decision to ski or not by the time they reach the top of a slope, but an ECT might change your mind and save your life. Conversely, if you decide to not ski because of dangerous conditions there is no need to dig. Regardless of experience, if we play in avalanche terrain we should hunt for instability.

The most likely situation is that you and your friends are on top of a slope and have decided that conditions are stable, forgetting that many accidents happen to skiers who do not take the final step to test the snowpack. A skier with basic avalanche knowledge will gather snow and stability information from the avalanche advisory as well as on the approach and ascent of a slope, looking for signs of instability like whumphing, cracking, and recent avalanche activity. Together, this information can be a solid baseline for making a go/no-go decision. At the top of a slope most skiers have already made the decision to ski or not, but there is a crucial question still unanswered: what is under our feet? We can guess or we can know. Knowledge is a powerful tool and personal responsibility requires due diligence. In this case, only a few additional minutes of work after an hour or more of skinning or hiking will yield an answer.

Digging is a quick way to search for instability. I have investigated many avalanche accidents where digging with a shovel would have set off alarms. In the most obvious circumstances a weak layer appears as a thick stripe, unhidden and unstable. I know of one person who would be alive today if he had dug a mere two feet down. Short of something this obvious, a quick, three-minute Extended Column Test (ECT) can give life-saving information. All you need is a shovel, probe and seven-foot piece of string to isolate a 3’x1’ column which you then impact with swats of your hand to test the snowpack stability. Instructions on how to perform an ECT are written below and demonstrated in a video on our Education/How to videos page.

The ECT will show us if the snowpack can propagate a fracture through the weak layer and avalanche. During the tapping phase, if the snow is unstable the column will break across its entire length, a warning to either go home or descend a safer line. If the column does not fully break there’s no harm done since you’ve already decided to ski. Stability tests tell us slopes are unsafe, not the other way around. For a skier new to avalanche country doing an ECT can provide a simple, quick assessment. There are nuances with the test and ratings that more advanced users can debate, but people do not die from nuances. They die from an ignorance of what lies under their feet.

There is no downside. If you have already decided to ski, a quick dig in the snow will never hurt and can only help.

Isolate a 3’ wide by 1’ deep column of snow. First, dig to the ground or to the weak layer we are most concerned with (which is identified in the daily avalanche advisory) making a smooth, 3’ wide wall which will become the open face of the column. Next, dig back 1’ exposing the second wall of your column. On the opposite corner (3’away) push your probe to the ground also 1’ back from the front edge. Put your string behind the probe and with the help of a partner saw the remaining two sides of a neat rectangle. Now that the 3’ x 1’ column is isolated, place your shovel blade face down on the surface at one end and tap 10 times from the wrist, then 10 times from the elbow and finally 10 times from the shoulder. If the entire column fractures horizontally the snowpack is unstable.

Eric digging a pit on the throne 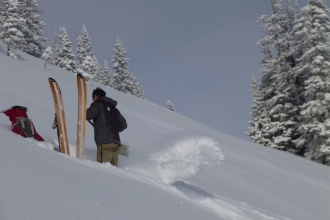