Good Morning. This is Doug Chabot with the Gallatin National Forest Avalanche Advisory issued on Tuesday, February 23, at 7:30 a.m.  Pinhead Classic Telemark Festival, in cooperation with the Friends of the Avalanche Center, sponsor today's advisory.  This advisory does not apply to operating ski areas.

Sunny skies will dominate our weather today before a few clouds roll in later tonight.  Mountain temperatures are in the teens this morning which are not much colder than yesterday's highs, although readings near West Yellowstone and Cooke City are in the chilly single digits.  Winds picked up yesterday morning out of the west and are still blowing 20-35 mph.  Today, temperatures will only reach the high teens with steady ridgetop winds.

On Sunday, Eric and I checked out the avalanche near Flathead Pass in the Bridger Range that skiers triggered on Thursday with a large cornice drop.  It was an impressive slide that averaged three to four feet deep and ran 1,000 feet wide.  This is the same slope that killed a skier in 2001.  This slope failed on facets near the ground.  Earlier in the winter these grains would fall out of the pit wall like sand, but over time they've compressed and gotten denser.  This avalanche clearly indicates that fractures on this layer can still propagate long distances.  Saddle Peak has a similar story and I expect the west side of the range to be equally weak. A skier on Sunday in Frazier Basin also got shears on these facets near the ground too.  Twelve to eighteen inches under the surface is another weak layer of small grained facets and feathery surface hoar crystals. Avalanches in Frazier failed on this upper weakness which is what Eric and I found in our snowpit (video).  We were worried enough about it that we skied on slopes no steeper than 35 degrees.

Avalanches on Cedar Mountain in the northern Madison Range were triggered by snowmobilers on Sunday (photo), likely on small faceted grains.   Yesterday, Moonlight Basin Ski Patrol got small slides to release with ski cuts on this layer too.  And an observer outside Cooke City also had slopes crack six inches deep on these facets.  Yesterday, strong winds created drifts on mid-mountain slopes in the Bridger Range while the upper elevations near Big Sky were loaded.   Freshly formed wind slabs are usually easy to trigger.  For today, the avalanche danger is rated CONSIDERABLE on all wind-loaded slopes and MODERATE on all other terrain.  Although a Moderate danger indicates the probability of triggering a slide is only possible, I recommend erring on the side of caution since people are still releasing big avalanches.  A "scary" Moderate better defines the conditions.

To slay the Avalanche Dragon and trigger an avalanche, think of tumbling, bus-sized cornice drops as a sawed off shotgun; there's no need to take aim to hit the weakest spot.  Skiers and snowmobilers are more like a small caliber hand gun; in order to slay the dragon a steady hand and sharp eye are needed. But no matter the trigger, the consequences are the same-a big avalanche.

The southern mountains from Big Sky to West Yellowstone have a similar snowpack structure to the northern ranges.  But avalanche activity has been limited since they've only been glanced by the big storms.  Facets on the ground are still able to fracture which a snowmobiler found out when he was partially buried a week ago at Lionhead.  Luckily he was dug out uninjured (video).  Surface hoar, a notoriously weak and persistent layer, is buried almost two feet deep.  It's not on every slope, but it's still a lingering problem.  The avalanche activity we just witnessed in the northern ranges is a prelude to what could happen with big enough loading in the south.  Even without much new snow, it's still possible to trigger a slide given the two weak layers buried in the snowpack.  For today, the avalanche danger is rated MODERATE on all slopes. 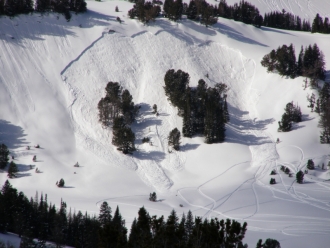 Avalanches are still happening in the northern Madison Range.  This avalanche 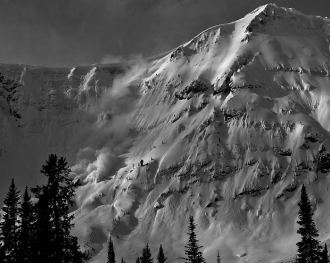 This avalanche was triggered by a cornice drop from the ridge above.  It brok