Merry Christmas Eve! This is Doug Chabot with the Gallatin National Forest Avalanche Advisory issued on Tuesday, December 24 at 7:30 a.m. Gallatin County Search and Rescue in partnership with the Friends of the Avalanche Center sponsors today’s advisory. This advisory does not apply to operating ski areas.

We are continuing a Backcountry Avalanche Warning for the Bridger Range and northern Gallatin Range.  More now has fallen in the last 24 hours and total accumulation over the past several days is over 30 inches.  This snow has fallen onto a weak and unstable snowpack. Strong winds out of the west-southwest have transported snow onto leeward slope causing additional stress. The avalanche danger is rated HIGH on all slopes in the Bridger Range and northern Gallatin Range.  Very dangerous avalanche conditions exist.  Travel in avalanche terrain is not recommended and avalanche runout zones should be avoided.

This warning will either be terminated or updated by 6:30 AM on Wednesday, December 25.

Snowfall continued through last night with 24 hour totals of 4-6 inches in the mountains around Bozeman, Big Sky and West Yellowstone.  Cooke City received over a foot.  Winds increased yesterday out of the west to southwest at 20-40 mph, but spiked last night with gusts near 60 mph. Cooke City still has strong northwest winds blowing 30-50 mph.  Today will become partly cloudy and temperatures will rise into the upper twenties by this afternoon. No new snow is expected and Santa should have good visibility as he makes his rounds to all those naughty and nice.

The Bridger and northern Gallatin Ranges have gotten the most snow over the last few days and also have the most unstable conditions, hence the Avalanche Warning. .8 inches of water (SWE) in the last 24 hours brings the total water to over 3 inches since last Thursday which is a lot of weight. Mark’s video from the northern Bridger Range on Saturday explains our situation perfectly: new snow + wind + weak snowpack = avalanches. He was able to remotely trigger an avalanche near Fairy Lake.  Yesterday, Eric carefully toured up Hyalite Canyon and found a large avalanche that released just hours before his arrival (photo1, photo2). His video shows just how weak the facets are.  High winds scoured some slopes (photo) while loading others and natural avalanches were seen along the Bridger ridgeline yesterday. For today the avalanche danger on all slopes is rated HIGH. Human triggered avalanches are very likely.

Can you travel in the backcountry during a High danger? Sure, just like some people surf during hurricanes. But let’s get something straight -- you better have your scene wired tight. A tiny error in terrain selection can be fatal. Stay far away from avalanche terrain since remotely triggering avalanches is possible.

Do not be fooled into thinking that since the avalanche warning does not include other mountain ranges the stability must be good. You would be very wrong. The mountains from Big Sky to West Yellowstone are straining to support all the new snow and wind-loads. The snowpack is faceted, weak and unstable.  Natural and human triggered slides are likely today. The worst areas will be found where the snowpack was thinnest during the early December cold snap, with the Lionhead area being the thinnest of all. The snowpack got very weak during this time and if it has not already avalanched, it’s poised to do so. It might just need a slight nudge from a person. The snowpack structure is poor: sugary, large-grained facets are underlying denser slabs of snow. Slopes that have the extra weight from wind-loads are extra dangerous.

During times like this, stick to the basics. Lots of new snow, strong winds and recent avalanches trump stability tests or your sixth sense that slopes are stable. Most are not. For today the avalanche danger is HIGH on all slopes steeper than 35 degrees AND on any slope with a wind-load. All other slopes have a CONSIDERABLE danger.

Cooke City deserves special mention this morning because in the last 24 hours it received the most snow and the strongest winds. Almost one inch of SWE has fallen and winds have not abated. 30-50 mph winds are blowing at many elevations and loading slopes. Riders yesterday found 1-2 feet of fresh snow, likely blown into harder slabs overnight. Mark was there last week and found that sugary facets near the ground plagued the thinner snowpacks (video). A few slopes have a weak layer of feathery surface hoar buried three feet or more under the surface.  It is not widespread, but you must travel as though it is; it’s like a mine field. My advice is simple: Don’t travel in avalanche terrain today. Stick to low-angled slopes (less than 30 degrees) and steer clear of avalanche path runout zones. For today, the avalanche danger is HIGH on all slopes steeper than 35 degrees AND on any slope with a wind-load. All other slopes have a CONSIDERABLE danger.

I will issue the next advisory tomorrow morning at 7:30 a.m. If you have any snowpack or avalanche observations drop us a line at mtavalanche@gmail.com or call us at 587-6984.

More information our complete calendar of events can be found HERE. 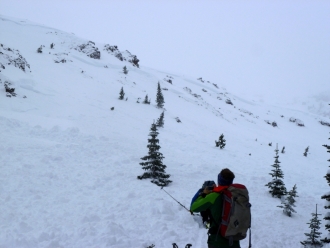 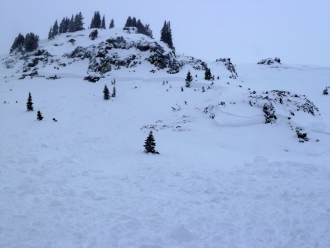 This natural avalanche occurred on a north/northeast facing slope around 9,300 ft. The slide failed 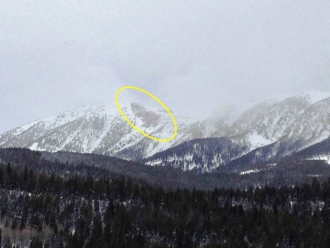 This photo of the east side of Bridger Peak was taken from the road.  It