Good morning. This is Mark Staples with the Gallatin National Forest Avalanche Advisory issued on Friday, March 27, at 7:30 a.m. The Bountiful Table and Lone Peak Brewery sponsor today’s advisory. This advisory does not apply to operating ski areas.

Yesterday morning the mountains near Bozeman received a trace of precipitation, rain or snow depending on elevation. Temperatures this morning were a few degrees either side of freezing under clear but warm skies. Near Bozeman gusty winds were blowing 20-35 mph from the W and 10-25 mph from the W in all other areas. Today will be mostly sunny and mountain temperatures could reach 50 degrees F in some places. Winds will blow 10-20 mph from the W.

Expect to see loose, wet snow avalanches on all aspects.  With very warm temperatures and strong sunshine, the new snow will become wet and slide on an ice crust about a foot deep. Because air temperatures were already near freezing this morning and skies were relatively warm despite being clear, wet snow avalanche activity could start fairly early today.

My partner and I rode in the Little Bear drainage of the northern Gallatin Range yesterday where the new snow was well bonded to the old snow surface but that will change today. Brief moments of sunshine caused pinwheels and rollerballs to instantly start tumbling downhill (photo) telling us conditions will quickly become unstable today. We found a similar snowpack situation riding near Big Sky with good stability on Wednesday that will deteriorate today (video). Eric and his partner skied in the backcountry near Bridger Bowl and had the same concerns yesterday (video).

Wet, slab avalanches are possible because small facets have been found under the new snow in isolated locations. Karl Birkeland found these facets in Hyalite on a NNE aspect (video), skiers triggered a dry snow avalanche on these facets last week in the northern Bridger Range on a NE aspect, and skiers at the Yellowstone Club spotted a fresh slab avalanche on a S aspect on Wednesday (photo).

Conditions will quickly become unstable today as the sun rises and temperatures climb well above freezing. For this reason today the wet snow avalanche danger is CONSIDERABLE.

Eric will issue the next advisory tomorrow morning at 7:30 a.m. If you have any snowpack or avalanche observations drop us a line at mtavalanche@gmail.com or call us at 587-6984. 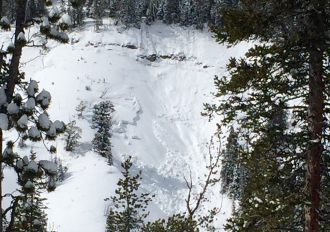 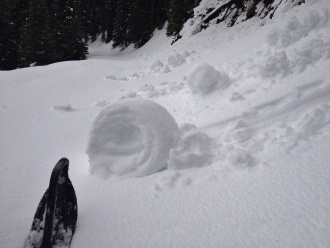