Good morning. This is Eric Knoff with the Gallatin National Forest Avalanche Advisory issued on Sunday, April 12, at 7:30 a.m. Gallatin County Search and Rescue in partnership with the Friends of the Avalanche Center sponsors today’s advisory. This advisory does not apply to operating ski areas.

The GNFAC is saddened to report that a skier died in an avalanche yesterday on the north side of Beehive Peak in the northern Madison Range. He was in a group of four and the first one to descend a couloir known as Hanging Garden on the north side of the peak. Some distance into the couloir, he was caught in a small avalanche that swept him over cliffs. We will complete a detailed accident report which will be available in the next few days. Our sincere condolences go out to the victim’s family and friends.

A fast but potent storm system dropped 5-7” of snow overnight in the mountains around Big Sky and Cooke City including the northern Gallatin Range. The Bridger Range picked up 4-5” while the mountains around West Yellowstone squeezed out 2-3”. This morning, temperatures range from the mid-teens to low 20s F and winds are blowing 15-25 mph out of the west. Today, temperatures will warm into the upper 20s to mid-30s F under partly to mostly cloudy skies. Winds will continue to blow 15-25 mph out of the W-SW. A building ridge of high pressure will produce clearing skies and nicer weather tonight into tomorrow.

Wind slabs will be today’s primary avalanche concern in the mountains around Bozeman, Big Sky and Cooke City. The new snow that fell overnight will easily be transported by moderate to strong winds out of the west-southwest. Fresh wind slabs will most likely be encountered on upper elevation slopes facing north through east.

Yesterday, a skier was caught, carried and killed by a small avalanche - most likely a small wind slab, when he was swept over cliffs (photo, photo). This is a strong reminder that small avalanches can have big consequences.

The 2-3” of new snow that fell in the southern ranges will not significantly increase the avalanche hazard. There is the possibility a skier or rider could trigger small wind slabs in upper elevation, leeward terrain. Pay close attention to slopes directly below the ridgelines and avoid areas that appear recently wind loaded.

Outside of freshly formed wind slabs, there is little avalanche hazard. The old snow surface will be frozen and locked up, which will keep all avalanche problems confined to the new snow.

We will update the advisory for the next few days as we gather more information about the accident on Beehive Peak. If you have any snowpack or avalanche observations drop us a line at mtavalanche@gmail.com or call us at 587-6984. 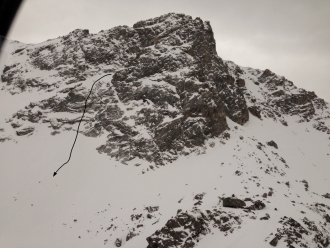 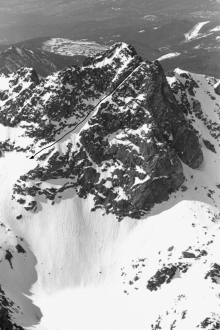 Hanging Garden is a line off the north side of Beehive Peak. It follows a