Good morning. This is Eric Knoff with the Gallatin National Forest Avalanche Forecast issued on Saturday, February 16th at 7:00 a.m. Today’s forecast is sponsored by Knoff Group Real Estate and Alpine Orthopedics. This forecast does not apply to operating ski areas.

Overnight, 2-3” of new snow fell across the forecast area. At 5 a.m. temps range from the single digits to low teens F under partly cloudy skies. Winds are blowing 10-25 mph out of the west-northwest in the northern ranges and 15-25 out of west-southwest near West Yellowstone and Cooke City. Today, much colder air settles into the region with highs warming only into the teens F. Winds will remain light to moderate out of the west-northwest across the forecast area. Lingering snow showers could drop an inch or two by tomorrow morning.

The snowpack remains under a tremendous amount of stress from recent loading events (video). Over the past four days, Madison Plateau Snotel site near West Yellowstone has received over 2’ of snow totaling close to 3” of SWE. This load is even heavier on wind loaded slopes.

Today, I would steer clear of all steep terrain including low angle slopes connected to steeper slopes above. Slopes loaded by west-southwest winds will be the most likely to hold thick pockets of wind drifted snow and produce human triggered avalanches. These areas should be avoided at all costs. Avalanches failing on weak interfaces in the storm snow are also likely. These slides will break 1-3’ on all aspects and elevations. With 3” of new SWE, slides breaking on weak facets near the ground are also possible (photo).

Today, dangerous avalanche conditions exist and the avalanche danger is rated CONSIDERABLE on all slopes.

Yesterday, Alex was in Cooke and covered lots of ground north of town – he did not observe widespread avalanche activity. He did see one large avalanche that broke 4-6’ deep and hundreds of feet wide on the east face Henderson Mountain (photo). This slide occurred on a heavily wind loaded slope and likely failed on facets near the ground. Fortunately, this slide was the exception and not the rule. However, it does illustrate that large and dangerous avalanches remain possible on heavily wind loaded slopes.

A more common scenario will be slides breaking in the new and wind-blown snow. Yesterday, Alex and his partner easily triggered small wind slabs that broke 1-2’ deep (photo). Winds were strong and gusty on all aspects and elevations yesterday, which developed wind slabs in some unusual areas.  Be especially aware of this problem below ridgelines and around cross loaded terrain features.

Heavy snow yesterday morning created touchy conditions in the mountains around Bozeman and Big Sky. Both Bridger Bowl and Big Sky Ski Patrols easily triggered soft slabs during control work that broke 6-12” deep. Activity was most widespread during the morning hours when wind and snow were the strongest.

Overnight, the mountains received 2-3” of low density snow, but winds backed off significantly. Today, I don’t expect conditions be quite as touchy. With that said, it’s essential to evaluate each slope carefully and avoid those that appear to be heavily wind loaded. Be most attentive on slopes below ridgelines and cross loaded terrain features, especially those in higher consequence terrain (photo). Outside of wind loaded slopes, the snowpack is generally strong and stable (video).

The Friends of the Avalanche Center and Montana State Parks installed an avalanche danger sign outside Cooke City. It sits next to the beacon checker and will be seen by riders and skiers as they head out of town. 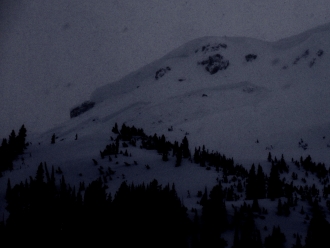 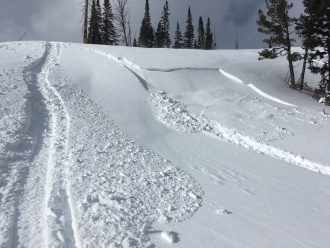 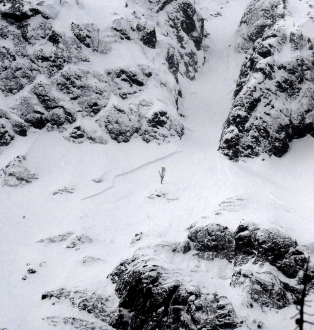 "Observed a couple of small, natural avalanches out there today (wind loaded