Good morning. This is Doug Chabot with the Gallatin National Forest Avalanche Forecast issued on Wednesday, February 27th at 7:00 a.m. Today’s forecast is sponsored by Gallatin County Search and Rescue and Bridger Bowl. This forecast does not apply to operating ski areas.

The Gallatin National Forest Avalanche Center is continuing a Backcountry Avalanche Warning for the Southern Gallatin and Southern Madison Ranges, the Lionhead area near West Yellowstone, the Centennial Range, and the mountains around Cooke City. Heavy snowfall and strong wind are creating very dangerous avalanche conditions. Natural and human triggered avalanches are likely. Avalanche terrain and avalanche runout zones should be avoided. The avalanche danger is rated HIGH on all slopes.

Yesterday afternoon a skier was killed in a slide on the west side of the Bridger Range at the top of Truman Gulch on a run called St. Lawrence. The skier was traveling solo and a separate party of two, skinning uphill, witnessed him triggering the slide and getting swept downhill. They responded swiftly, got a beacon signal and saw his hand sticking out of the snow. They dug him up and did CPR, but the skier never revived. He was carried approximately 1,000 feet vertical down a steep slope causing fatal trauma. The skier was a well-known and beloved local and we are deeply saddened to report this tragic accident. In the coming days we will release a full accident report, but unfortunately, because of the dangerous avalanche conditions we cannot investigate the site. Preliminary information and photos are located here.

Since yesterday morning 4” fell in the Bridger Range and 8-12” fell everywhere else. At 5 a.m. temperatures are in the teens to low 20s, except near Bozeman where they are near 0F at low elevations. Winds are southwest (northeast in the Bridgers) averaging 15-20 mph with gusts of 35 mph. Snowfall today and tonight will drop 1-2” in the northern areas and 6-8” in the southern ranges with more snow falling tomorrow. Winds will continue to blow 20-30 mph from the southwest and mountain temperatures will remain in the 20s.

In the southern mountains the snowfall continues and so does the Avalanche Warning. The snow just keeps stacking up, day after day. As a rule of thumb, 1” of snow water equivalent (SWE) equals a foot of snow. The Lionhead area has gotten almost 6” of SWE in 4 days, 3.5” in Taylor Fork and over 4” outside Cooke City. This is a heavy load, especially given the poor snow structure of weak faceted snow near the ground. Yesterday, Eric and I toured into Bacon Rind and had a large collapse and poor stability test scores. We skied our skin track out. On Saturday, Eric and Alex made a video near Lionhead showing the poor snow structure and avalanche potential. Stay out of avalanche terrain today. That includes traveling below open slopes. Many have died traversing underneath steep terrain. I expect numerous natural avalanches breaking in the new and windblown snow and a few others breaking near the ground. Today the danger is rated HIGH on all slopes.

A solo skier died in a large avalanche yesterday on the west side of the Bridger Range. He triggered the slide on a heavily wind-loaded slope that broke up to 4 feet deep and 100 feet wide. He was carried over 1,000 feet vertical and did not survive the traumatic ride. New snow and strong east and south winds created dangerous avalanche conditions, which will continue today. The terrain is serious enough and conditions are bad enough that we are not investigating the accident site.

The northern mountains have gotten about a third of the snowfall of the southern mountains (1.4”-2.2” SWE) and the strong wind has drifted the snow into thick, deep drifts which can easily break from the weight of a skier or rider. Simply put, avoid wind-loaded terrain. These zones are found near ridgelines, on both west and east aspects, and also mid-mountain in gullies and couloirs. Ian was on Buck Ridge on Sunday and found unstable wind drifts and shooting cracks in front of his sled (video). For today, the avalanche danger is rated CONSIDERABLE on wind-loaded slopes and MODERATE on all others. 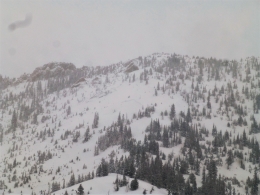 Seventeen people have died in avalanches across the U.S this winter (‘18/’19). Take a few minutes to read this season’s avalanche fatality reports. These reports provide a great opportunity to learn from these tragic accidents. 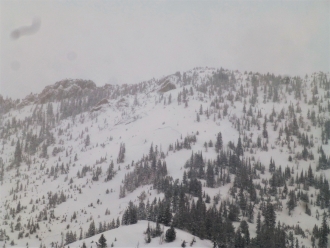 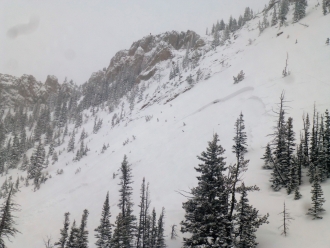 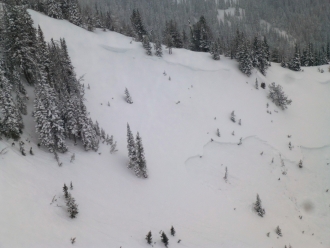 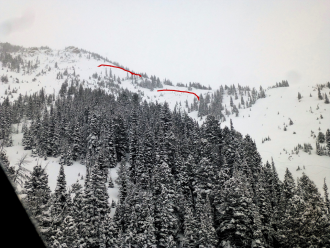 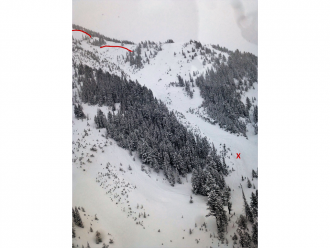