Good morning. This is Ian Hoyer with the Gallatin National Forest Avalanche Forecast issued on Tuesday, March 26th at 7:00 a.m. Today's forecast is sponsored by Community Food Co-op and Knoff Group Real Estate. This forecast does not apply to operating ski areas.

This morning temperatures are in the 20s F and there is no new snow. Winds are south and west at 10-20 mph with gusts of 25-35 mph. Today temperatures will reach the high 30s F and into the 40s F. Cloud cover will increase through the day. Winds will be 15-25 mph out of the south and southwest. Snow flurries tonight won’t bring significant accumulation.

Avalanches are unlikely this morning, but will become more likely as temperatures rise and crusts break down. Yesterday, skiers triggered loose snow avalanches near Big Sky that while only involving the 3” of new snow, ran 400’ on the firm crust (photo). Near Cooke City, skiers found the new snow well bonded to the old snow surface. After a day of warm temperatures, this will be the case on most slopes. Still, as the day heats up, you could trigger small loose snow avalanches, particularly in areas that were cloudy yesterday but are sunny today. There may also be isolated pockets where you could trigger a wind slab avalanche. Shady slopes loaded by yesterday’s south and west winds are the most suspect. Be cautious of steep, wind loaded slopes if the snow surface feels stiff and is cracking under your feet or sled.

Yesterday, Doug and I found a dusting of new snow over a stout crust near Lionhead (video). On shady slopes the lower snowpack is dry and stable. On sunnier slopes you’ll find unfrozen slush under the crust. As the crust melts this afternoon and becomes unsupportable on those sunny slopes, you could trigger a deeper wet avalanche (video). The timing of this breakdown will vary depending on aspect and cloud cover, but once you start sinking above your boot tops in wet snow it’s time to get off steep slopes. Pinwheels and rollerballs are warning signs that the snow surface is becoming wet and the danger is starting to rise.

Avalanche danger is LOW this morning and will rise to MODERATE this afternoon. 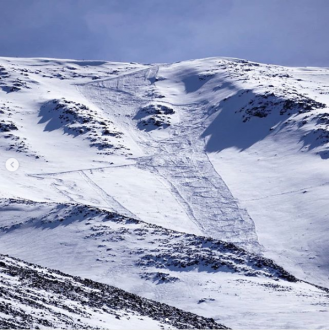 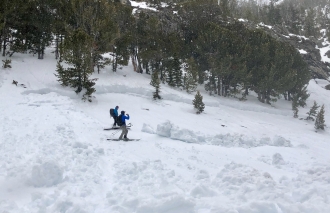