Good Morning. This is Eric Knoff with a spring snowpack and weather update on Wednesday, April 10th at 7:00 a.m. The Gallatin National Forest Avalanche Center has stopped issuing daily avalanche forecasts for the season. This bulletin will be updated Friday morning and does not apply to operating ski areas.

At 5 a.m., temperatures range from the upper teens to mid-20s F and winds are blowing 10-20 mph out of the west-northwest. Cloudy skies and light snow showers are likely this morning with an additional 1-2” of snow possible by this afternoon. Snow lets up later in the day and skies become partly to mostly cloudy. Temps warm to the upper 20s to low 30s and winds remain light to moderate out of the west-northwest.

Lows tonight drop well below freezing and no significant accumulation is expected over the next 24 hours. There is a chance the sun will poke out tomorrow increasing the possibility of wet snow avalanches.

Since yesterday morning, a potent spring storm dropped 6-12” of heavy dense snow in the mountains across the forecast area. This latest round of moisture pushed three day precipitation totals upwards of 2.5-3” (weather log). On slopes below 8,500’, the new snow has been deposited on a wet and saturated snowpack (photo). The combination of dry snow on the surface and wet snow near the ground will create funky and unpredictable conditions today.

Slides originating in the new snow could gouge into saturated layers deep in the pack, producing large and dangerous avalanches (video). Today, use extra caution when traveling on or underneath steep slopes. Avalanches will be easy to trigger, making cautious route finding and conservative decision making essential.

On slopes above 9,000’, wind slabs and storm slabs are the primary concerns. Yesterday, Big Sky Ski Patrol triggered slides on the upper mountain that were big enough to bury a skier or rider. These slides were most prevalent on slopes loaded by westerly winds and stayed confined to the new snow. Skiers outside of Cooke City did not report widespread instability but did find over a foot of new snow which relegated them to low angle terrain choices.

Additional snow and wind today will keep the avalanche danger elevated across the forecast area. Today, don’t become tempted to shoot for your favorite steep lines with all the new snow – keep in mind dangerous avalanche conditions exist. It’s important to note that Bridger Bowl is no longer operating and holds backcountry conditions which means no ski patrol are on duty. If the sun comes out tomorrow, wet snow avalanches will be a growing concern.

We will issue weather and snowpack updates on Monday and Friday mornings for most of April, and update our weather log daily. 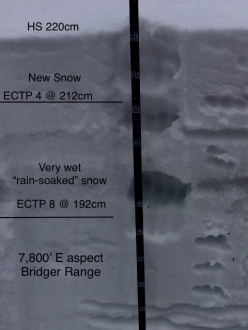 Snowpit dug at Bridger Bowl on Monday (4/8). Heavy snow and rain are creating