This is Doug Chabot with pre-season avalanche, weather and event information for the Gallatin National Forest Avalanche Center on Thursday, October 17th. This information is sponsored by Grizzly Outfitters and Your Montana Chevy Dealers, both supporters of next week’s Powder Blast fundraiser.

A cold front will hit southwest Montana later this afternoon bringing snow tonight and again Saturday afternoon into Sunday morning. The storm will favor the mountains south of Bozeman including Cooke City. By morning 2-4” will accumulate with another 6-8” expected over the weekend. Mountain temperatures are forecasted to drop to the high teens with freezing line near 5,000’. Ridgetop winds will be westerly at 20-30 mph.

We will update our Weather Log and Regional Conditions every morning with snowfall totals, and our Avalanche Activity list if we get a report. Also, on the Regional pages are webcams and links to weather stations.

The expected snow and wind in the next 4 days will increase the chances of triggering an avalanche. Slopes that are dirt today will not become dangerous with the new snow, but slopes above 8000’ harboring older snow will have the potential to slide. These upper elevation slopes have 3-6” on the ground in the northern areas and 6-10” in the south and even deeper in wind drifted terrain. The new snow may not bond well to the old snow surface so be vigilant: dig down to test the interface and be on the lookout for obvious signs of instability like recent avalanche activity and cracking and collapsing. These are bulls-eye information that the snow is unstable, and a warning to avoid steep slopes.

Slopes with dense, wind-loaded snow are inviting to ski and easy to ascend on skins or foot (photo), however, freshly formed drifts will also be the most susceptible to avalanche. In October of 2017, a skier died in the southern Madison Range when a small wind-loaded slope avalanched as she was skinning uphill (report). Both she and her partner were caught. Snowpack conditions this weekend may be similar. No matter if you are traveling on foot, snowshoes or skis, travel one at a time in avalanche terrain.

Hunters are not immune to avalanches. Typically they are solo and do not carrying rescue gear so avoiding avalanche terrain is their only defense.

Ice climbers are also susceptible to triggering avalanches since they are typically at high elevations, on foot and in steep, exposed terrain where even a tiny avalanche can knock them off a cliff.

Finally, skiers should treat the early season with the same respect as they do mid-season. Helmets are a good idea with a thin snowpack, and standard rescue gear (beacon, shovel and probe) should always be carried.

We are preparing for winter, setting up weather stations and beginning to collect snowpack information. If you have avalanche, snowpack or weather observations to share, please submit them via our website, email (mtavalanche@gmail.com), phone (406-587-6984), or Instagram (#gnfacobs).

Get tickets for the 21st Annual Powder Blast Fundraiser on October 25th at The Emerson Ballroom.

6 November, 1-hr Avalanche Awareness, 6-7pm @ The Base Camp in Helena.

Get tickets for the 21st Annual Powder Blast Fundraiser on October 25th at The Emerson Ballroom. 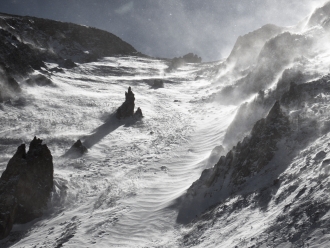 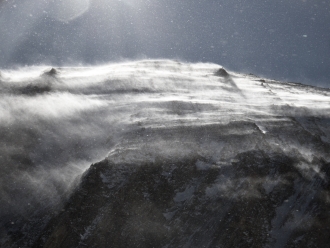 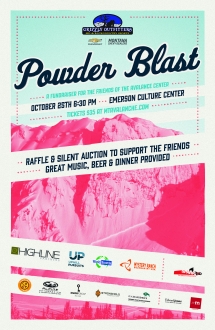