This is Alex Marienthal with the Gallatin National Forest Avalanche Forecast on Thursday, December 5th at 7:00 a.m. Today’s forecast is sponsored by Uphill Pursuits and Beartooth Powder Guides. This forecast does not apply to operating ski areas.

*Note: Bridger Bowl will open this Friday. No uphill travel is permitted starting today, to allow the ski patrol to prepare the entire mountain for opening.

This morning the mountains have no new snow, temperatures are mid-teens to mid-20s F, and wind is 5-15 mph out of the west. Today, temperatures will reach high 20s to low 30s F and wind will be 0-10 mph. The next chance for snow is Sunday morning.

Yesterday I went to Buck Ridge near Big Sky and found a poor snowpack structure with a foundation of sugary, weak facets (photo, video). This structure is similar to what Doug, Ian and Dave found in the southern Madison Range (video) and mountains near West Yellowstone (video). It is becoming more stable without new snow and wind to add load, but the poor structure makes triggering an avalanche possible if you find the right spot on a slope.

Signs of instability such as collapsing and “whumphing” of the snowpack are becoming less frequent and may not present obvious clues that the snowpack is unstable. Carefully evaluate the snowpack and terrain, and avoid steep slopes if you find sugary weak snow below a cohesive slab. Today, avalanches large enough to bury a person are possible to trigger, and avalanche danger is MODERATE.

The Bridger Range, Hyalite and mountains near Cooke City have a snowpack that lacks widepsread buried weak layers. Without recent snow and wind the snowpack is generally stable, but this does not mean avalanches are impossible to trigger. Slopes that were heavily loaded by wind after last weekend’s storm are where you might get unlucky. On Tuesday, Bridger ski patrol triggered a couple large slides when they cut large cornices along the ridgeline (photo1, photo2). This was their first time doing control work on these slopes, so the snowpack there is similar to the backcountry, like what you might find on Saddle Peak.

It is early season and we still have limited data, but so far evidence favors a mostly stable snowpack near Bozeman and Cooke City. Even with a mostly stable snowpack, it is important to carefully evaluate consequences of terrain and the stability of each slope. Today, avalanches are possible on wind loaded slopes where avalanche danger is MODERATE. On non-wind loaded slopes avalanche danger is LOW. 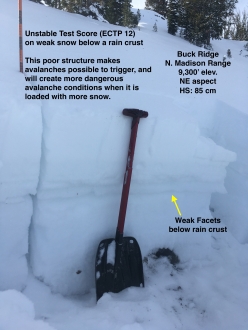 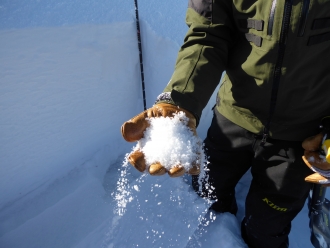 At the bottom of the snowpack is a thick layer of weak and sugary, faceted 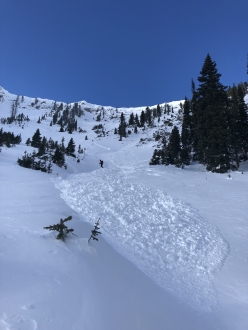 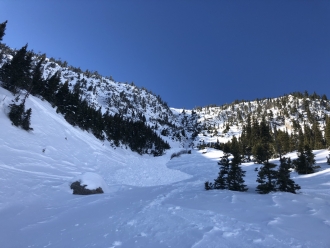 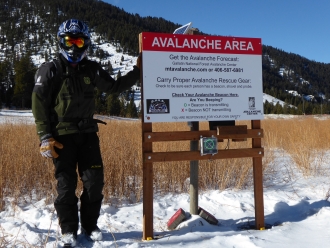 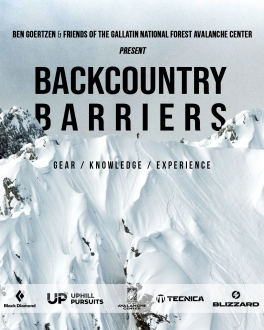 We recognize that backcountry skiing can be daunting to approach. That’s why Ben Goertzen and