Good Morning. This is Ian Hoyer with the Gallatin National Forest Avalanche Forecast on Friday, December 13th at 7:00 a.m. Today’s forecast is sponsored by Bridger Bowl and Montana State Parks. This forecast does not apply to operating ski areas.

This morning, there are 1-3” of new snow around Bozeman and Big Sky, 4-6” around West Yellowstone, and 5” near Cooke City. Winds are west at 15-25 mph, gusting up to 45 mph. Temperatures are in the high teens to low twenties. Showery snowfall will continue today and through tonight. Expect 1-2” across most of the advisory area by tomorrow morning, with 4-6” near Cooke City. Winds today will be westerly at 15-30 mph with strong gusts. High temperatures will be mid-20s to low-30s F under cloudy skies.

The mountains near Big Sky and West Yellowstone have the dangerous combination of a weak snowpack loaded by new snow and strong winds.

Yesterday, riding on Buck Ridge we could tell the snowpack was weak before we even started digging. We sunk hip deep into the weak snow when we stepped off our sleds and got several collapses – clear signs of instability. A layer of surface hoar buried a foot down was breaking easily in stability tests (video). Below the surface hoar were several crusts and multiple layers of weak, faceted snow. The snowpack further south is even weaker (video) and those areas received more new snow. Triggering an avalanche is likely. Avoid riding on or beneath slopes steeper than 35°. The avalanche danger remains CONSIDERABLE today.

Another 5” of new snow in the Cooke City area makes triggering avalanches likely today. Yesterday, ski guides got multiple large collapses on the weak layer that Doug and I found on Monday (video, photo) and decided to stick to low angle terrain (details). Follow their example and do the same today.

Avalanches will be the easiest to trigger and largest on wind drifted slopes, but as the new snow piles up you could also trigger slides on non-windloaded slopes, so don’t let your guard down. The avalanche danger is CONSIDERABLE.

The snowpack in the Bridger Range is not as weak as areas near Big Sky and West Yellowstone, and it hasn’t been loaded by as much new snow as around Cooke City. Unfortunately, that only means that the avalanche conditions aren’t quite as bad, not that it’s stable. There is a layer of weak, faceted snow, that is buried around a foot deep (deeper on windloaded slopes). On Monday, Alex found this weak layer capped by a hard windslab on Saddle Peak (video). Today, you can trigger a small avalanche in a fresh wind drift or potentially a larger slide breaking on this weak layer. The avalanche danger is rated MODERATE.

Yesterday, Doug went to Hyalite to check on conditions before the Bozeman Ice Fest. His avalanche concerns were limited to the new snow on windloaded slopes (video). Skiers on Blackmore reported heavy windloading, but stable conditions otherwise. Pay attention to the snow beneath your feet. Cracks shooting out from your boots or skis are a sure sign to stay off steep slopes. The avalanche danger is MODERATE on wind-loaded slopes and LOW elsewhere.

Check out this report of a close call with an avalanche in Alaska. A solo hiker was caught and buried for over an hour before being dug out by a passer-by. While we're glad it had a happy outcome, it’s a good reminder to always carry rescue gear and go with a partner to tilt the odds in your favor. 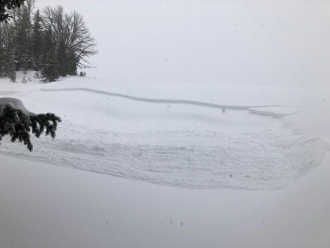 Natural avalanches were reported on Buck Ridge on 12/8. They likely broke on recently buried 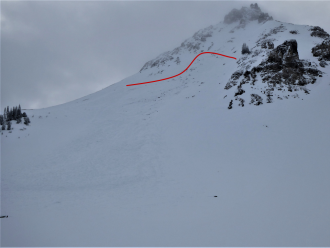 This avalanche on Crown Butte outside Cooke City occurred naturally on Dec 8. It is