Good Morning. This is Ian Hoyer with the Gallatin National Forest Avalanche Forecast on Friday, December 20th at 7:00 a.m. Today’s forecast is sponsored by Cooke City Motorsports and World Boards. This forecast does not apply to operating ski areas.

This morning there is a dusting of new snow around West Yellowstone and Cooke City with none across the rest of the advisory area. Moderate southwest winds are gusting up to 50 mph and temperatures are in the teens to high 20s F. Expect continued windy conditions and mostly cloudy skies today with temperatures rising into the high 20s and low 30s F. Brief snow showers are possible but there will be no significant accumulations.

Yesterday, I rode in the Taylor Fork area and was pleasantly surprised by what I found. Weak layers that were giving unstable test results last weekend no longer are. Without significant new snow, avalanches are becoming harder to trigger (video). The trend is in the right direction, but we’re not completely out of the woods yet, avalanches are still possible today. With an assortment of weak layers throughout the snowpack and near the ground, if you do trigger a slide it can break deep and wide (photo).

On Wednesday, skiers near Lionhead had the snowpack collapse under them several times, demonstrating that all the ingredients needed for an avalanche remain present. Examine the snowpack carefully and think through the consequnces of a slide before getting onto steep slopes today. The avalanche danger is rated MODERATE.

In the mountains around Cooke City be on the lookout for a weak layer near a crust in the middle of the snowpack. A number of avalanches broke on this weak layer last weekend (on Mt. Abundance,  Mt. Fox, Republic Creek, the Fin and Crown Butte). There has only been a dusting of new snow over the last week. This has given the weak layer time to stabilize and accommodate the load, but it still deserves attention as triggering an avalanche remains possible today.

Yesterday, Alex dug south of town and found this weak layer still reactive on a windloaded southwest facing slope (video). This weak layer is most prevalent on sunny slopes. Before riding in avalanche terrain do your homework by digging looking for the weak layer. The avalanche danger is MODERATE today.

The snowpack is generally stable in the Bridger and Northern Gallatin ranges. Avalanche concerns are isolated to pockets of wind drifts near ridgelines. Earlier this week, a couple small slides broke in Hyalite (details) and there was a larger slide on Saddle Peak (details). While most of these wind slabs will now be glued on, still be mindful of heavily windloaded areas. For today, the avalanche danger is rated LOW.

The Utah Avalanche Center has posted the full accident report from Sunday’s avalanche fatality near Park City. The report is available HERE. 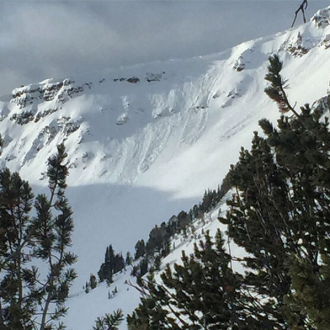 From Instagram: "Couple of small natural wind slabs around 10,200’ NE in Hyalite. Not sure 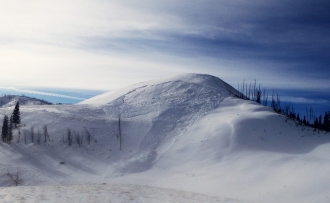 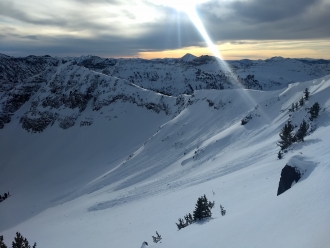 From an email, "... our party observed several small to medium-sized releases that occured on