Good Morning. This is Ian Hoyer with the Gallatin National Forest Avalanche Forecast on January 3rd at 7:00 a.m. Today’s forecast is sponsored by Grizzly Outfitters and Spark R&D. This forecast does not apply to operating ski areas.

A trace to an inch of new snow fell since yesterday morning. West and southwest winds are 20-30 mph with gusts up to 40 mph near Bozeman and Big Sky. Near West Yellowstone and Cooke City, winds are 10 mph with gusts to 30 mph. Temperatures are in the teens to low 20s F this morning and will rise into the 20s and low 30s F today. Scattered showers will bring a dusting to two inches of new snow by tomorrow morning, with winds staying steady.

Triggering a large avalanche is likely today, particularly on windloaded slopes near ridgelines. While snowfall tapered off yesterday near Bozeman and Big Sky, strong west winds continued with gusts up to 40 mph. With around a foot of recent snow (1-1.5” of snow water equivalent) available for transport, dense drifts of wind deposited snow continued to build and get deeper. This continued loading means the snowpack hasn’t had a chance to catch it’s breath yet. Avoid steep slopes and give it time to adjust. Slides will break in the new snow, but could also break on weak layers deeper in the snowpack if you get unlucky. The avalanche danger is rated CONSIDERABLE today.

The southern mountains got a little less snow (~1” SWE), but it fell onto a weaker snowpack. Triggering large avalanche breaking near the ground is the primary concern. On Wednesday, Doug and Dave found the weak, sugary snow at the ground struggling to support the new snow at Bacon Rind (video). With these widespread weak layers, you can trigger an avalanche from flat ground beneath a steep slope. Give steep slopes and the runout zones beneath them a wide berth while the snowpack adjusts to this new load. For today, the avalanche danger is rated CONSIDERABLE on all slopes.

The mountains near Cooke City have multiple avalanche concerns, but for today the strategy to deal with all of them is simple – avoid steep slopes. While this storm generally brought a foot of new snow (1” of SWE) to the mountains around Cooke City, yesterday I found some areas with closer to two feet of new snow with deeper drifts. These drifts were cracking and a number of small avalanches were seen in the new snow (details). If that’s not enough to keep you off steep slopes, there is also the possibility of avalanches breaking near the ground. Slopes that stayed shallow through the early season have weak snow at the ground that just got a big load put on top (video). Human triggered avalanches are likely and the avalanche danger is rated CONSIDERABLE.

On New Year’s Day, two snowmobilers lost their lives in an avalanche near Seeley Lake, west of Missoula. We'll provide updated information as it becomes available, but for now  preliminary news coverage can be found here. 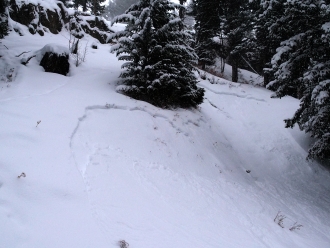 This natural avalanche was on Town Hill, outside Cooke City, on a SE aspect about 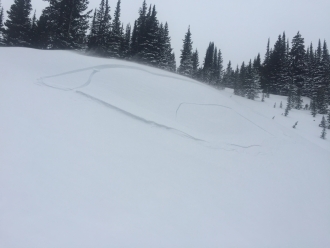