Good Morning. This is Dave Zinn with the Gallatin National Forest Avalanche Forecast on Tuesday, January 7th at 7:00 a.m. Today’s forecast is sponsored by Montana State Parks and Cooke City Super 8/Bearclaw Bob’s. This forecast does not apply to operating ski areas.

In the last 24 hours, snow favored the southern ranges with 8-10” in Cooke City and West Yellowstone, 2-3” around Big Sky and trace elsewhere. Winds are 10-20 mph from the west to southwest in the southern mountains and 15-30 mph in the northern ranges and temperatures are in the teens to low 20s F. Today, winds will be 25-35 mph from the southwest with temperatures in the 30s F. Cooke City will receive an additional 6-8” of snow by Wednesday morning, Lionhead will get 1-3” and the other ranges will get a trace.

The avalanche equation in Cooke City is simple. Heavy snow and wind in the last 24 hours will result in avalanches today. The mountains received 10” of snow last night adding up to .9” of snow water equivalent (swe) and winds are gusting up to 40 mph on ridgetops. Ian explains avalanche precautions on storm days like this in his video. You are very likely to trigger avalanches in wind loaded areas and likely to trigger slides everywhere else. Avalanches within the new snow will be large and it is possible to trigger slides breaking deeper into the snowpack like those on Henderson and Chimney Rock ten days ago (photos). Stick to low angle slopes today and avoid flat areas underneath avalanche terrain. The avalanche danger is rated HIGH on wind loaded slopes and CONSIDERABLE in all other areas.

3-8” of new snow favored the area around West Yellowstone and winds gusting 35-40 mph will stress the weak snowpack in the Lionhead, Southern Gallatin, and Southern Madison Ranges. Yesterday in the Taylor Fork, my partner and I found the weak structure that is consistent in the mountains from Big Sky through West Yellowstone (video, Bacon Rind video, Lionhead video). On Friday, the GVSA groomer was collapsing flat slopes and falling into the weak facets at the bottom of the snowpack. Today, human triggered avalanches are likely and conservative decision-making is essential. Stay off steep slopes and give extra distance to areas where the wind is creating fresh drifts of snow. The avalanche danger is CONSIDERABLE.

It was an exciting weekend in the Northern Madison, Bridger, and Northern Gallatin Ranges. Riders in Second Yellowmule triggered an avalanche that broke 10 feet deep from low on the slope, partially burying two people (details). Doug and Alex visited the site on Sunday and captured some breathtaking photos (photo, photo, video). A dog-triggered avalanche passed within 150 feet of my partner and me as we ascended out of Middle Basin (video, photo). And, the Big Sky and Bridger Bowl Ski Patrol triggered large, hard slab avalanches on deep, persistent weak layers during control work (photo, photo). Today, avalanches will be harder to trigger and early red flags will be less likely. Approach steep terrain with caution and after a thorough assessment. The danger is rated MODERATE with natural avalanches unlikely and human triggered avalanches possible.

On New Year’s Day, two snowmobilers lost their lives in an avalanche near Seeley Lake, northeast of Missoula. Our condolences go out to their friends and families. The West Central Montana Avalanche Center has released a preliminary report. 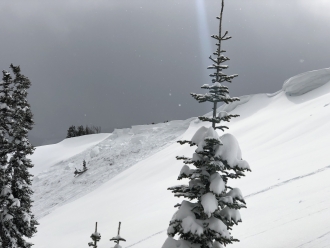 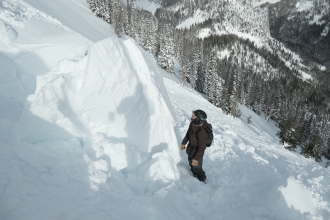 Large cornice collapse in Middle Basin. The cornice broke 10' back from the edge, 6-7' 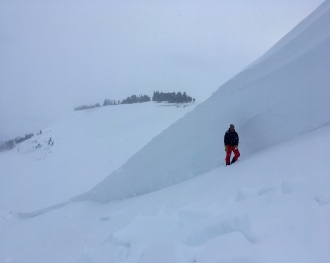 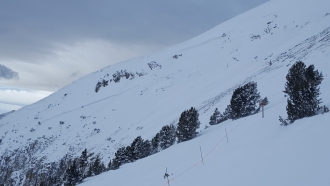