Good Morning. This is Alex Marienthal with the Gallatin National Forest Avalanche Forecast on Monday, February 10th at 7:00 a.m. Today’s forecast is sponsored by Yellowstone Club Community Foundation and Werner Wealth Management. This forecast does not apply to operating ski areas.

At 6 am the Bridger Range has 12” of new low density snow, Hyalite and Big Sky have 5-9”, Cooke City has 2” and near West Yellowstone zero. Temperatures are single digits to teens F and wind is northwest at 5-15 mph with gusts to 20 mph. Today temperatures will be teens F with northerly wind at 10-25 mph. Snow showers will end later this morning with an additional 2-4” possible near Big Sky and Bozeman.

Today a foot of new low density snow (0.4-0.6” SWE) adds weight to buried weak layers and forms fresh slabs that can avalanche. These slabs and dry loose avalanches are easy to trigger, and can break avalanches deeper in the recent storm snow or on sugary snow near the ground.

Yesterday we hunted for avalanche crowns in the Bridger Range. From Flathead Pass to Bridger Peak we saw dozens of crowns that broke within the recent 3-4 feet of snow and deeper on sugary snow near the ground (photo). On the west side of the range in Truman Gulch avalanches broke on sugary snow 3-5’ deep and were miles wide. Debris ran to the end of the runout zone and snapped trees (photos, video). Photos from Bridger Peak, the west side, and Saddle Peak show a fraction of the recent carnage.

The recent storm dropped 3-4 feet of snow equal to 3-4” of snow water equivalent (SWE) near Bozeman, Big Sky and Hyalite. Over the last week wind from every direction formed thick fresh drifts that can still break deep (photo). Yesterday on Mt. Ellis multiple groups reported widespread collapsing. On Saturday, near Big Sky riders triggered avalanches and saw a large natural that broke during the storm (photo, photos and details), and a child triggered a small, but potentially deadly avalanche on a road cut (photo). This is just the beginning of a long list of reported recent activity (avalanche log).

In the mountains near West Yellowstone and Cooke City the storm last week delivered 2-3 feet of snow equal to 2” of SWE. Moderate wind drifted this snow into fresh slabs which are easy to trigger, and could break deeper avalanches on weak sugary snow near the ground (photo). Yesterday near Cooke City skiers and riders saw recent natural wind slabs (photo) and easily triggered 4-6” drifts on small slopes (photo, photo). Snowmobilers in the southern Madison Range saw similar small slides (photo). Dave and Doug rode in Lionhead and saw avalanches that broke in the recent storm snow, and overall stability was better than expected (video).

Make it a daily habit to check out our Weather and Avalanche Log. It’s a great way to get a quick snapshot of what’s been happening in the backcountry. 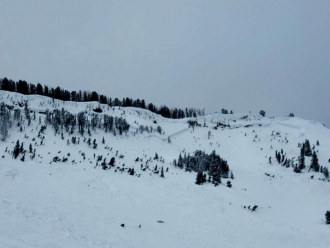 This large natural slide broke during the storm on Feb 7. It is at the 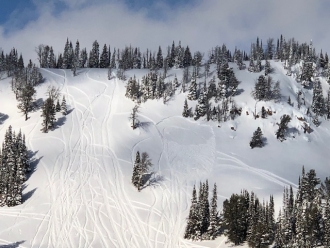 "...were up in Tepee today, we saw a couple small slides the one below look 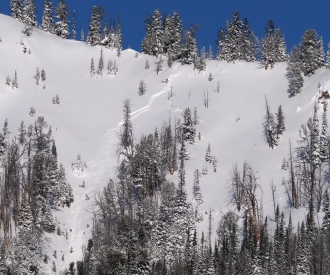 "...a fresh avalanche observed out there today.  A south aspect around 9400', estimated to be 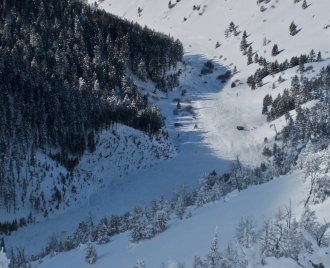 On 2/9/20 we saw deep avalanche crowns throughout the Bridger Range. These broke at various times throughout 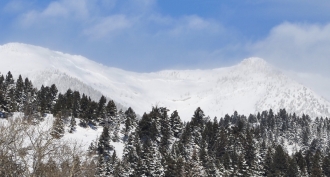 On 2/9/20 we saw deep avalanche crowns on all aspects through the Bridger Range. These 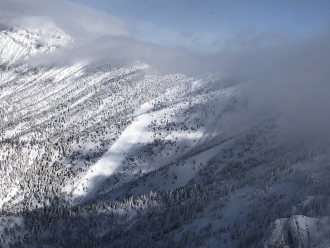 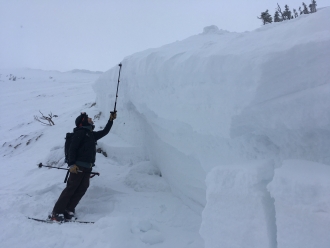 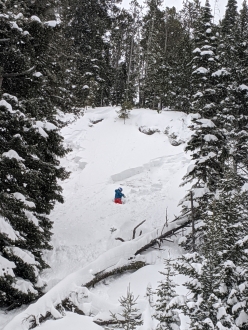 On private property, this small child triggered a slide and climbed out of the debris