Good Morning. This is Dave Zinn with the Gallatin National Forest Avalanche Forecast on Tuesday, February 25th at 7:00 a.m. Today’s forecast is sponsored by Cooke City Super 8/Bearclaw Bob’s and Community Food Co-op. This forecast does not apply to operating ski areas.

In the last 24 hours, the Bridger and Northern Gallatin Ranges received 15-20” of snow, with 5-8” in the Northern Madison Range and 0-3” in the Southern Ranges and near Cooke City. Winds are 10-15 mph from the west in the northern ranges and from the north in the southern ranges. Mountain temperatures are in the single digits to low teens F. Today, the skies will be partly cloudy, winds will be 5-15 mph from the west to northwest and temperatures will rise into the high teens and low 20s F.

Dangerous avalanche conditions exist with 15-20” of new snow in the Northern Gallatin and Bridger Ranges (1.3” of snow water equivalent - SWE) and 5-10” in the Northern Madison Range (0.6” of SWE). Yesterday in Hyalite Canyon Doug noted that it was snowing and blowing hard, actively loading slopes at all elevations and quickly forming drifts that he carefully avoided. At the same time, I was touring in Beehive Basin and found new snow and the weak snowpack structure we have seen all year (video). This winter’s snowpack has repeatedly demonstrated that snowfall and heavy wind loading leads to large avalanches failing on deeply buried weak layers. You can go to our Weather and Avalanche Log to see this pattern.

The mountains around Cooke City received 3-5” of new snow in the last 36 hours (0.4” of SWE) with strong wind gusts near ridgelines. Ian skied in the Republic Creek drainage yesterday and observed fresh drifts and some shooting cracks within the top 6” of the snow. Recently, the snowpack in Cooke City has been handling new snow loads well and avalanches are staying contained within the upper layers of the snowpack. However, the presence of deeply buried weak layers still gives us pause.

Today, avoid steep slopes with fresh drifts especially in high consequence terrain such as gullies, in the trees, and above cliffs. Larger, deep slab avalanches are unlikely as weak snow near the ground gets harder to trigger but remain vigilant to this lessening possibility by following safe travel protocols and looking for any sign of deeper instabilities. Human triggered avalanches are possible and the avalanche danger is MODERATE.

The Southern Madison and Gallatin Ranges and Lionhead area received 0-1” of snow in the last 36 hours. This fell on a strengthening snowpack and will not change the avalanche danger. Yesterday, winds gusted up to 40 mph from the north, but without much new snow available for transport wind loading will only be a factor in isolated areas. Watch Ian and Doug’s video from Skyline Ridge to learn more about the current state of the snowpack.

Avoid the isolated slopes where you find fresh drifting especially in higher consequence terrain. Human triggered avalanches are unlikely and the avalanche danger is LOW.

On Saturday 2/15, three motorized snowbikers were caught in an avalanche in Colorado and two were killed. The full accident report is now available here. Please take the time to learn what we can from this and all accidents. 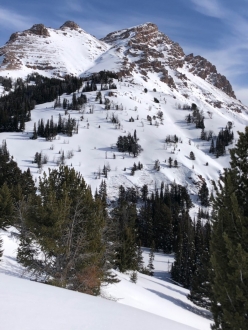 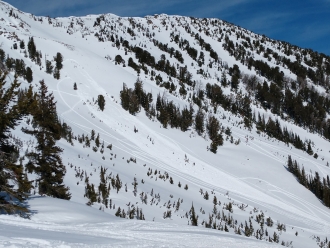 From obs: "Seemed stability was getting better, but did see this minor slide that pulled 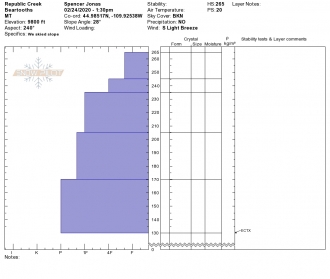 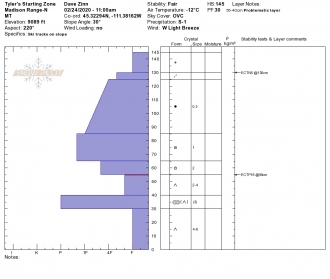