Good Morning. This is Doug Chabot with the Gallatin National Forest Avalanche Forecast on Thursday, March 12th at 7:00 a.m. Today’s forecast is sponsored by Montana Alpine Guides and Yellowstone Club Community Foundation. This advisory does not apply to operating ski areas.

Last night the northern Gallatin Range picked up 7” of new snow with 1” falling around Big Sky, Carrot Basin and Cooke City. West Yellowstone and the Bridger Range were missed. West wind gusted into the 50s yesterday and lessened a bit overnight. Throughout the day, wind will blow from the west to northwest at 10-20 mph with gusts of 30-45 mph. Temperatures dropped abruptly into the teens last night and are only expected to climb into the mid-30s F today. Skies will clear this morning and no new snow is expected until Friday night.

Today’s weather forecast of wind and relatively cool temperatures will keep the wet snow avalanche danger LOW. However, if the temperatures warm towards 40F and the wind lessens and the sun is out, the wet snow avalanche danger could rise to MODERATE. The good news is that it will be obvious: on sunny slopes the surface snow will quickly wet and you will see pinwheels rolling downhill that could trigger loose, wet avalanches.

The northern Gallatin Range was gifted 7” of snow last night that measures .5” of snow water equivalent. Strong wind blew from the west that loaded slopes and grew cornices. Skiers and sledders could trigger avalanches in the windblown snow and also in the new snow. It is unlikely avalanches will break deeper. Cornices are primed to snap off so be extra cautious as you travel along ridgelines. Shooting cracks in the new or wind drifted snow are signs to stay clear of steep slopes. For today, the dry snow avalanche danger is rated MODERATE.

Last night’s 1” of new snow is not enough to increase the avalanche danger. Wind continues to blow strong at ridgelines although there is not much snow left to transport (photo). There may be small and isolated wind drifts that could be triggered, but there is not widespread instability. During times of generally safe avalanche conditions we understandably let our guard down, but this carries risk. Today the risk involves getting surprised if a small wind-drift breaks when many others did not. It also involves cornices breaking much further back than you thought possible. These overhangs of snow grew in size over the last few days and will be vulnerable to breaking (photo). They regularly catch unsuspecting skiers and sledders.

On Tuesday I was in Cooke City and found wind-loading at many elevations (video) which is what Ian also saw on Buck Ridge (video). That same day in the Bridger Range many wind slabs at the ridgeline broke naturally and from skiers (photo, details). I expect these drifts to be mostly stuck in place by now. The sugary facets near the bottom of the snowpack are still there and unlikely to break anytime soon. A large, quickly applied load like a massive cornice fall could trigger that layer, but that would be exceptional.

For today, since natural and human triggered avalanches in the dry snow are unlikely, the danger is rated LOW. 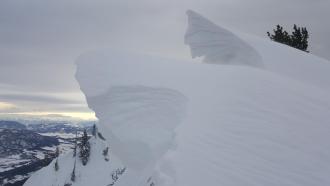 Cornices have grown rapidly in the last few days. These will be susceptible to breaking 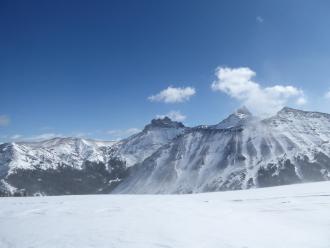 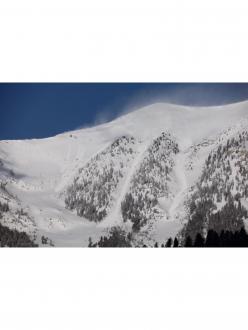 The winds blew the new new into wind slabs that avalanched naturally yesterday. This photo