Good Morning. This is Doug Chabot with the Gallatin National Forest Avalanche Forecast on Thursday, April 2nd at 7:00 a.m. Today’s forecast is sponsored by Werner Wealth Management and Uphill Pursuits.

Bridger Bowl is closed and advises against uphill travel which could place first responders at risk. Backcountry conditions exist. There is no avalanche control or ski patrol rescue. Please do not loiter or congregate in the parking lots. The coronavirus likes skiing too.

Number of COVID-19 cases in Gallatin County one week ago: 24

Winter’s grip is strong. Mountain temperatures dropped to the single digits last night with a bitter east to northeast wind averaging 10 mph and gusting to 30 mph. Yesterday morning another 1-2” of snow fell before the storm ended. Today, skies will become partly cloudy, temperatures will rise into the high 20s F and wind will shift to the northwest at 10-20 mph. No snow is expected, just chilly temperatures and a biting east wind.

A large snowstorm ended yesterday morning. Total snowfall was 14-20” that measured 1.5-2” of snow water equivalent (SWE) and created instability throughout our forecast area. Yesterday, avalanches released naturally and a few were human triggered. The full list is here.

All this activity occurred in the upper 2-3 feet of the snowpack on a weak interface of either an ice crust, feathery surface hoar, or small-grained facets. It really doesn’t matter which since they are all a similar depth and unstable. Dave and I found all three in the last week during field trips to Buck Ridge (video), Taylor Fork and Lionhead (video). Yesterday we toured along the Bridger ridge and could easily sluff the new snow which would travel far once it stepped down to the ice crust (video). In a few spots it broke as a soft slab, but did not propagate far. Stability tests are showing this weakness, so dig and test. More than one party kept to low-angled slopes after getting poor test scores.

There has been no new snow since yesterday morning and last night’s wind changed direction from west to east and lessened in speed. East wind is an unusual direction and will drift snow in unusual places. Overall the avalanche danger is less than yesterday, but there is still a strong possibility of triggering slides, most notably on wind-loaded slopes or steep terrain that has not sluffed. Cracking, collapsing and recent avalanche activity are bulls-eye information to avoid a slope, and we had all 3 in the last 24 hours. Do not let clearing skies and fresh powder give you a false sense the world is peachy. It is not.

For today, throughout our forecast area, the avalanche danger is rated MODERATE on all slopes.

Sunshine may dampen the snow surface, but wet avalanche activity is unlikely given the cold air temperatures.

We are ending daily avalanche forecasts this Sunday, April 5th and will post general weather and avalanche bulletins every Monday and Friday through April. Continue to send us your observations. You can fill out an observation form, email us (mtavalanche@gmail.com), leave a VM at 406-587-6984, or Instagram (#gnfacobs).

See our calendar for a couple live online avalanche courses being offered this week.

A backcountry skier was caught and injured in an avalanche in Colorado on Tuesday, 3/31. Details are here. This incident is on the heels of another avalanche on 3/24 that caught, partially buried and injured a snowboarder (details here). Backcountry rescues are risky in the best of times. With COVID-19 running amok, rescuers are also at risk to exposing each other to the virus. Be smart, be safe and think of others. 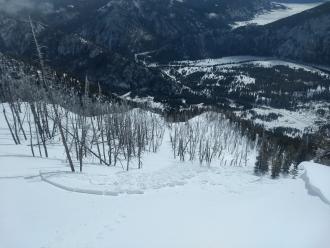 "I skied near Quake Lake today, and observed several signs that the snowpack has not 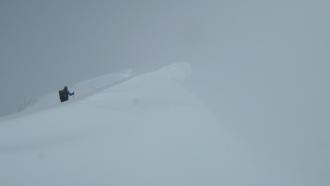