Good Morning. This is Dave Zinn with the Gallatin National Forest Avalanche Forecast on Tuesday, January 19th at 7:30 a.m. This forecast is sponsored by Community Food Co-op and Montana Backcountry Alliance. This forecast does not apply to operating ski areas.

An additional 1 to 3” of snow in the mountains fell yesterday before the storm ended. This morning, temperatures are in the single digits F and the wind is blowing 5-15 mph from the west to northeast. Skies will clear through the day with temperatures reaching the low 20s F and the wind will shift to the southwest and increase to 10-20 mph in the afternoon. The next chance for snow will be Thursday into Friday.

The mountains around Cooke City received 7" of new snow with 0.6" of snow water equivalent (SWE) in the last 48 hours. Winds died down this morning but not before creating unstable drifts sitting on a layer of weak surface hoar buried a foot underneath the snow on many slopes. We found this layer reactive in our snowpits during the last two days of riding north of Cooke City, saw shooting cracks, and triggered a small avalanche on a test slope (video). A layer of sugary facets buried 2-3' deep on some slopes has also caused avalanches this season (avalanche activity list). The challenge in Cooke City this year relates to spatial variability, meaning that the snowpack structure changes from relatively stable on one slope to relatively unstable on another (video). This was most clearly demonstrated in the case of the nearly fatal avalanche on the Fin ten days ago (avalanche details). The safest strategy is to maintain a healthy level of skepticism regarding slope stability and diligently manage your terrain.

The Bridger, Northern Gallatin, and Northern Madison Ranges received 4-7" of new snow in the last 48 hours equal to 0.3-0.7" SWE. The Southern Madison, Southern Gallatin, and Lionhead Ranges received less snow (2-3") but the story is the same. New snow fell onto a snowpack with two distinct weak layers. The first consists of a nearly universal layer of weak, sugary facets near the ground. Avalanches failing on this layer are becoming harder to trigger as the snowpack gets deeper while simultaneously becoming larger and more dangerous. The second is a layer of feathery surface hoar now buried under a foot of snow. This layer is not on all slopes but as Doug explained on Mount Blackmore yesterday, it is best to make terrain decisions assuming that it is present (video).

The wind will ramp up this afternoon into tomorrow, transporting the fresh snow into drifts that will crack and avalanche under a skier or rider's weight. Watch for signs that wind-loading is increasing, such as plumes of snow blowing off ridgelines or across slopes.

Large, human-triggered avalanches are possible today and the danger is rated MODERATE. With multiple persistent weak layers in the mix, ski and ride conservatively by staying off and out from under steep slopes.

TONIGHT, Tuesday, January 19, 6-7 p.m. The Friends of the Avalanche Center will offer a FREE 1-hr Avalanche Awareness Talk in partnership with the University of Montana Western School of Outreach. The talk will be a live, ONLINE event. Join us HERE. 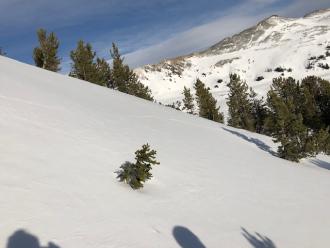 From obs: "While skinning up the south shoulder of Scotch Bonnet [on 1/15/21], about half 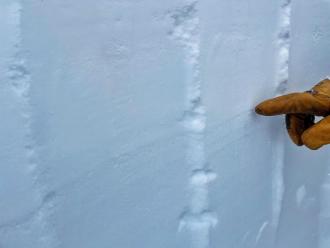 Look for a distinct stripe in the wall of your snowpit 0.5-1.5' beneath the snow 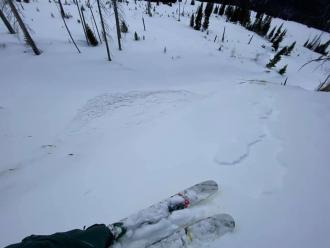