Good Morning. This is Doug Chabot with the Gallatin National Forest Avalanche Forecast on Thursday, January 28th at 7:15 a.m. Today's forecast is sponsored by Ph.D. Skis and Advanced Innovation. This forecast does not apply to operating ski areas.

At 5 a.m. the southern mountains are getting snow with Taylor Fork showing 10”, West Yellowstone getting 8” and Cooke City with 2”. The storm will continue in the south and not reach the Big Sky and Bozeman areas today. Currently wind is south to southwest at 15-30 mph with gusts of 50 mph and temperatures are in the mid teens F. Wind and temperatures will not change much throughout the day. By tomorrow morning the mountains south of Big Sky to West Yellowstone will get an additional 8-12” with Cooke City getting 4”. The storm will continue into Friday and hit the northern mountains that evening.

It is snowing in the southern mountains. Already ten inches has fallen at the Carrot Basin SNOTEL in Taylor Fork measuring 5% density cold-smoke powder (.5” of snow water equivalent, SWE). Outside West Yellowstone there is 8” of snow (.4” SWE), but that will deepen today and tonight. Wind will blow today’s new snow into drifts.

The avalanche danger is rising. The snowpack is weak and the weight of new snow and windblown snow will make slopes unstable. A thick, widespread layer of facets at the ground will become easier to trigger. Another weak layer of feathery surface hoar 1-2 feet deep is also unstable, but it’s distribution is spotty (Bacon Rind video, Taylor Fork video). Today’s snowpack analysis is simple: it is snowing, the instability is rising and it’s likely you’ll trigger an avalanche. Visibility will be poor and with a rising danger it is best to avoid steep slopes and flatter areas under steep slopes, called runout zones. Today the avalanche danger is rated CONSIDERABLE on all slopes.

The mountains from Big Sky to Hyalite to the Bridger Range have only gotten a trace of new snow. The avalanche potential in these mountains involve two weak layers: a widespread layer of sugary snow at the ground (photo of slides in Frazier Basin) and a layer of thin, feathery surface hoar found in isolated areas. Cracks or “whumpfs” of the snowpack are signs that a rider or skier could trigger a slide. On our field day to Buck Ridge a week ago (video) we had the snow break in our tests and we saw many slides that were triggered. Not much has changed since. Triggering avalanches is becoming more difficult, but still possible, and the danger is rated MODERATE on all slopes.

The mountains around Cooke City got a couple inches of snow with south wind gusting to 40 mph. Skiers noted cracking of wind blown snow near Republic Pass yesterday, a sign of instability. Many slopes in the area are stable, but a few are problematic. I investigated three avalanches on Monday that were triggered by snowmobilers over the weekend (video, Huckleberry photo, Sheep Mountain photo). These broke on a weak layer buried 12-18” deep (surface hoar or small-grained facets). Skiers got a spiderweb of cracks on this same layer on Monday (photo). Furthermore, a thin, weak layer of sugary facets buried 3 feet deep is still worth remembering. Cracking, collapsing or recent avalanche activity are signs to stay out of avalanche terrain no matter the weak layer. For today the avalanche danger is rated MODERATE on all slopes.

The Last Word: February 6th and 7th is the King and Queen Fund-raiser at Bridger Bowl. Due to the pandemic it is a GS race this year. Prizes will be awarded for the fastest race results AND separate prizes for folks who raise the most money over $500. No racing is necessary to compete for the fundraising prizes. Info is HERE. 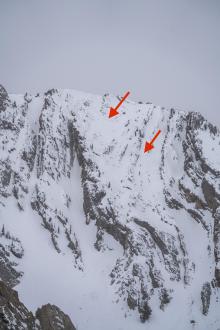 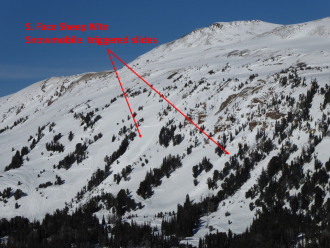