Good Morning. This is Ian Hoyer with the Gallatin National Forest Avalanche Forecast on Saturday, February 6th at 7:15 a.m. Today's forecast is sponsored by Gallatin County Search and Rescue and Grizzly Outfitters. This forecast does not apply to operating ski areas.

In the last 24 hours, 12” of new snow fell in the Bridger Range, 5-7” near Big Sky and Cooke City, and 3-4” near West Yellowstone. The heaviest snowfall tapered off around noon yesterday. Winds have been strong out of the west, consistently 20-30 mph with gusts of 50-60 mph. Mountain temperatures are in the single digits F in the northern areas and Cooke City with temperatures around 20 degrees near West Yellowstone. High temperatures will be teens to low 20s F. Westerly winds will back off slightly to 15-20 mph with gusts of 30 mph.

Snowfall today will be heaviest in Cooke City. With another pulse of snow tonight, expect around a foot of fresh in Cooke City and 6-10” elsewhere by tomorrow morning.

Another foot of new snow fell yesterday in the Bridger Range onto a remarkably weak snowpack. 30” of snow (3” of snow water equivalent) have accumulated since Wednesday. This is a huge load and makes for very dangerous avalanche conditions. This new snow is falling onto the weakest snowpack we’ve had in years (video showing that weak snow in December). Strong gusty west winds have compounded the problem. With wind gusts into the 50s mph last night expect wind-loading in unusual places. A dusting of fresh snow on top will make it hard to identify loading patterns. Keep it simple: avoid all steep slopes to avoid triggering a big slide. With especially weak snow near the ground, stay well out from under steep slopes as well because you could trigger a slide from below. A large natural avalanche broke to the ground yesterday on a low elevation slope just above Fairy Lake (details). Human triggered avalanches are likely today. The avalanche danger is HIGH on wind-loaded slopes in the Bridger Range and CONSIDERABLE on all other slopes.

New snow, very strong winds, and a weak snowpack are a bad recipe. Human triggered avalanches are likely across the Madison and Gallatin Ranges. Skiers yesterday in the southern Gallatin and Madison Ranges had the snowpack whumpf and collapse under them. If they were on steep slopes they would have triggered avalanches. Last weekend, big slides broke deep and wide on weak layers mid-pack and near the ground (Lionhead video, Ernie Miller video). With more new snow, similar slides are likely today. The avalanche danger is CONSIDERABLE in the Gallatin and Madison Ranges.

Yesterday, a skier triggered and was partially buried by an avalanche that broke 1-2 ft deep on a weak layer just below the new snow on Woody Ridge (details). Alex was north of town yesterday and also concerned about weak layers lower in the snowpack waking up with more loading (video). Snowfall is going to ramp up in intensity today. Human triggered avalanches are likely and they may break 2-4 ft deep or even deeper on a windloaded slope. Start off with conservative plans and if it’s snowing heavily, tone down your objectives even further. The avalanche danger is CONSIDERABLE.

TODAY and TOMORROW - February 6th and 7th -- AWESOME PRIZES for individuals who raise over $500! Two pairs of skis, Airbag Avy pack, and more! Deadline for fundraising is 1:15 p.m. Sunday, Feb. 7. No racing is necessary to compete for the fundraising prizes. Info is HERE.

There were nine avalanche fatalities across the US in the first four days of February. News articles and preliminary reports are available from northern California, Alaska, New Hampshire, and two from Colorado (#1 & #2). This tragic spate of deaths is a sobering reminder of the seriousness of recreating in avalanche terrain. Stay safe, don’t become another statistic. 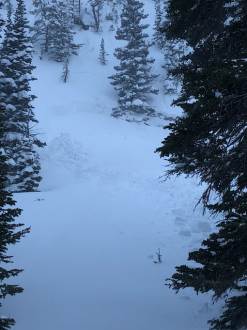 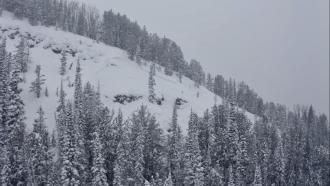