Good Morning. This is Ian Hoyer with the Gallatin National Forest Avalanche Forecast on Friday, February 12th at 7:30 a.m. Today's forecast is sponsored by Grizzly Outfitters and Blitz Motorsports and Yamaha. This forecast does not apply to operating ski areas.

We’re now four days out from the last significant snowfall. But that snowfall was a big one, with 2-4 ft of snow accumulating during the storm. Strong winds after the storm drifted the new snow around and continued loading the snowpack on many slopes through the first half of the week. During the storm there were widespread natural avalanches (Bridger Range video, Buck Ridge video, large Skyline Ridge avalanche photo). The snowpack is no longer hair-trigger, but triggering avalanches remains very much a possibility. Yesterday, snowmobilers in Portal Creek remotely triggered two large avalanches that broke on weak snow near the ground (details and photos). Thankfully no one was caught.

In Teepee Basin yesterday, I saw numerous natural avalanches that broke during the storm, but didn’t get the weak layers to break in my snowpack tests (video). I still kept off steep slopes because recent avalanche activity is clear evidence that the snowpack has been pushed past its breaking point and the weak layers in the bottom half of the snowpack will take a while to heal, despite mixed signals from snowpack test results. While the likelihood of triggering a slide is slowly decreasing, the consequences aren’t diminishing. Stay diligent and keep making conservative terrain choices.

The avalanche danger is MODERATE.

Cooke City saw 3-4 feet of snow during the last storm and strong winds at all elevations out of many directions. Numerous natural avalanches were reported following the storm, including a very large one on the south face of Mt. Abundance (photo), on Town Hill (photo), and slides that propagated widely, low on Woody Ridge (photo). Triggering a large avalanche on buried weak layers remains possible today, particularly on wind-loaded slopes. Watch for drifts in unusual places on low elevation slopes as well as the usual areas around ridgelines. The danger is rated MODERATE.

Bundle up and pay attention for signs of frostbite and hypothermia if you’re out recreating in the Arctic temperatures around Bozeman. Brrr! 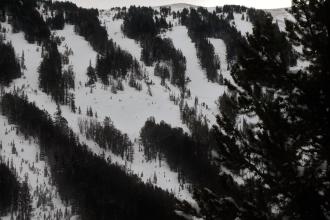 From email on 2/11: "interesting Av. activity in a Central Park - mid-lower Woody. This 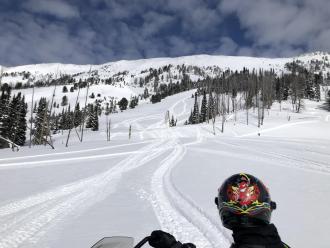 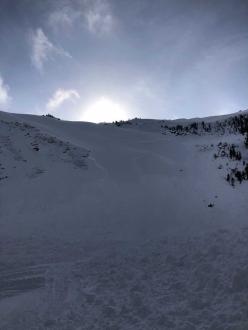