Good Morning. This is Alex Marienthal with the Gallatin National Forest Avalanche Forecast on Sunday, February 21st at 7:15 a.m. Today's forecast is sponsored by Highline Partners and Gallatin Valley Snowmobile Association. This forecast does not apply to operating ski areas.

Yesterday the mountains received 2-3” of low-density snow with light west-northwest wind. Overnight, wind shifted west-southwest and increased to 20-30 mph with gusts of 40-55 mph. This morning temperatures are single digits to teens F. Today temperatures will reach mid-20s F and wind will be westerly at 20-35 mph. Light snow showers will drop 1-3” near Cooke City by tomorrow morning with a trace to an inch elsewhere.

Many natural avalanches broke on weak, sugary snow near the bottom of the snowpack after strong winds a few days ago drifted 2 feet of recent snow into heavy slabs. Today, strong west winds will drift snow into thicker slabs and grow cornices large along ridgelines. The additional weight of a skier, rider or cornice fall could trigger a very large, deep slab avalanche. It is more difficult to collapse this deep weak layer than it was a few week ago, but if you do trigger an avalanche it will be destructive and deadly.

In the southern Gallatin and Madison Range and near West Yellowstone, weak, sugary snow near the ground makes large avalanches possible. The potential size of avalanches is similar to those we have seen recently near Bozeman and Big Sky, but less snow and wind through the week lowers the likelihood of triggering an avalanche. These mountains received 1-1.5 feet of snow since last weekend which will be drifted into fresh slabs by wind today. These slabs are possible to trigger and they could break deeper and wider on weak snow near the ground. Today, large avalanches are possible to trigger and avalanche danger is MODERATE.

The mountains near Cooke City got over a foot of snow in the last week equal to 1.2” of snow water equivalent (SWE). This is a small load on a snowpack that lacks widespread buried weak layers. The primary avalanche concern is fresh drifts formed by recent wind which can break under the weight of a skier or rider (Dave’s video from Wednesday, snowmobile triggered avalanche on Crown Butte last Thursday). Slopes with a shallower snowpack are less common, but are where you might find weaker, sugary snow below a slab (skier on town hill got a large collapse yesterday). The avalanche danger is MODERATE near Cooke City. Carefully evaluate the snowpack and consequences of a slide before travel on or underneath steep slopes. 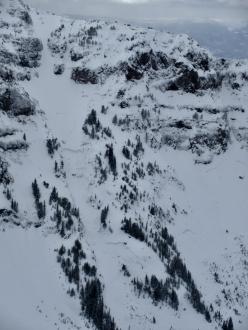 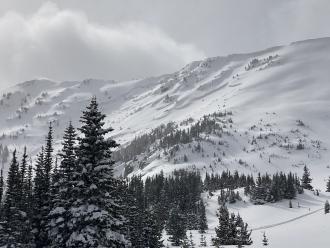 From obs [2/20/21]: "We observed a large natural slide on Flanders Mountain that likely occurred

END_OF_DOCUMENT_TOKEN_TO_BE_REPLACED
Slide East of the Sphinx 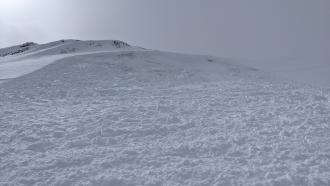 From obs: “Triggered a large slide with a snowmobile. Went all the way to the 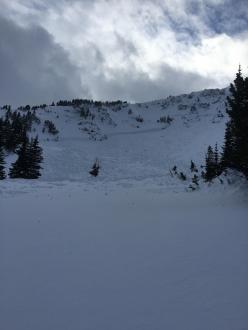 END_OF_DOCUMENT_TOKEN_TO_BE_REPLACED
Natural avalanche below Maid of the Mist

From e-mail:  "...a photo of what appeared to be a natural D2 underneath the Maid