Good Morning. This is Alex Marienthal with the Gallatin National Forest Avalanche Forecast on Sunday, February 28th at 7:15 a.m. Today's forecast is sponsored by Yellowstone Club Community Foundation and Stronghold Fabrication. This forecast does not apply to operating ski areas.

Since yesterday morning the mountains near Bozeman and Big Sky got 2-3” of light new snow, and elsewhere got none. This morning wind is westerly at 15-25 mph with gusts to 30 mph, and up to 50 mph in the Bridger Range. Temperatures are single digits above and below zero F. Today, under partly cloudy skies, temperatures will reach low 20s F and wind will be west-northwest at 10-20 mph with gusts to 30 mph. This week will be warm and mostly clear with no snow until next weekend.

Yesterday’s snow favored the Bridger Range and West Yellowstone with 10-12” of snow equal to 0.7” of snow water equivalent (SWE). Elsewhere got 3-6” of snow equal to 0.3-0.5” of SWE. Wind increased last night and is drifting the new snow into fresh slabs. These slabs are easy for a rider or skier to trigger, and their additional weight increases the chances to trigger a deeper avalanche on weak, sugary snow near the ground. Yesterday I found this weak snow buried 3-4’ deep on Mt. Ellis (photo, snow profile). It collapsed and propagated in most stability tests, but just knowing it exists on almost every slope was enough to avoid slopes steeper than 30 degrees. Avalanches on this layer are becoming more difficult to trigger, but they will be deep and wide, destructive, and potentially deadly (Blackmore video, McAtee Basin video).

Today fresh wind slabs are likely and will be larger where more new snow fell. Any amount of wind-loading with the weak snow buried deep in the snowpack is reason to step back to more conservative terrain selection. Avoid wind-loaded slopes, and remain extra cautious of all slopes steeper than 30 degrees. The avalanche danger is rated CONSIDERABLE on wind-loaded slopes and MODERATE on all other slopes.

Near Cooke City, weak snow near the ground is less widespread, but remains a concern in addition to avalanches breaking in recently drifted snow. Recent avalanche activity and signs of instability have been on either heavily wind-loaded slopes or slopes with a relatively shallower snowpack (5-6 feet). Slopes with both are the most unstable. A natural avalanche in Hayden Creek earlier in the week was on a wind-loaded slope that has avalanched several times already this year keeping the snowpack unusually thin and weak (details). Yesterday skiers in Republic Creek had unstable test scores (ECTP 30) on a weak layer buried 2.5 feet deep in a 5-6 foot deep snowpack. These conditions are not widespread, but are where avalanches are possible to trigger today. Assess for and avoid steep slopes that are heavily wind-loaded or suspect of having buried weak layers. Today, avalanches are possible to trigger and the avalanche danger is MODERATE. 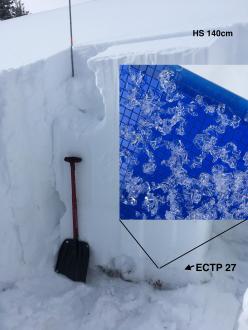 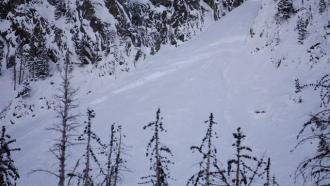 Photos sent to us on 2/27/21 of recent activity south of Livingston. Photo: D. Britt 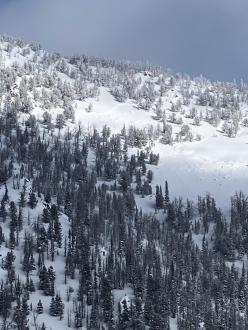 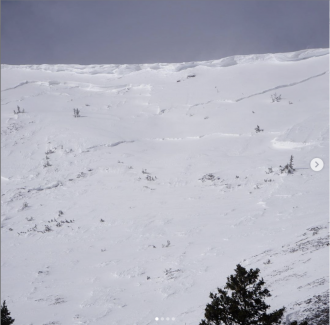 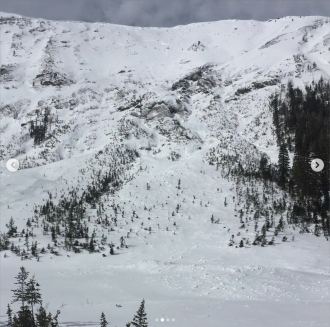