Good Morning. This is Dave Zinn with the Gallatin National Forest Avalanche Forecast on Tuesday, March 2nd at 7:15 a.m. Today's forecast is sponsored by World Boards and Mystery Ranch. This forecast does not apply to operating ski areas.

There are three avalanche concerns in the mountains around West Yellowstone, Big Sky and Bozeman, large avalanches breaking on widespread and deeply buried weak layers, slides consisting of recent wind-drifts, and wet snow avalanches during the heat of the day. The scariest of these are deep-slab avalanches failing on weak layers near the ground. On Sunday, two groups, one in Red Canyon and one near Buck Ridge, had close calls with deep-slab avalanches (see yesterday’s Red Canyon video, details and photos; Buck Ridge details and photos). It will become harder to trigger these dangerous avalanches the further removed we become from the last loading event, but the consequences remain the same. Minimize your exposure to steep slopes that have deep, persistent weak layers.

Moderate to strong winds last weekend created drifts of snow and grew the large cornices overhanging slopes. Wind-slabs are problematic in their own right and a cornice collapse or smaller wind-slab avalanche can trigger a deeper slide near the ground as I saw in the Taylor Fork (video) and Doug and Alex saw north of Bridger Bowl on Sunday (photo, video). Wind-slabs will stabilize relatively quickly but continue to give cornices a wide berth as they can break far back from the edge.

Watch for signs that snow near the surface is getting wet and losing cohesion as temperatures increase. Rollerballs and gloppy, wet snow are good indicators to move onto cooler slopes as wet, loose avalanches can run far and pack a punch.

Today, human-triggered avalanches are possible and the danger is rated MODERATE.

The mountains around Cooke City have a deeper snowpack and lack widespread persistent weak layers. Yesterday, a group near Daisy Pass spotted a pair of fresh avalanches that illustrates the primary concern of wind-loaded snow (photo 1, 2). Last week, a larger avalanche in the Hayden Creek drainage broke 200’ wide and up to 6’ deep on a heavily wind-loaded slope (details). Avoid steep slopes with recent drifts of wind-blown snow especially in areas where a small avalanche could have significant consequences. While not widespread, some slopes have sugary snow near the ground. Evaluate the snowpack before entering steeper terrain to minimize the chances of finding one of these weak trigger-points. Ian explains both issues in his video last week. Human-triggered avalanches are possible in the mountains around Cooke City and the danger is rated MODERATE. 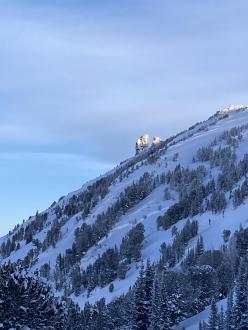 END_OF_DOCUMENT_TOKEN_TO_BE_REPLACED
Skier triggered from far away 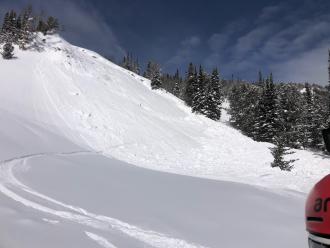 This avalanche was triggered on Sunday, 2/28, when a skier released another slide 2-300 feet 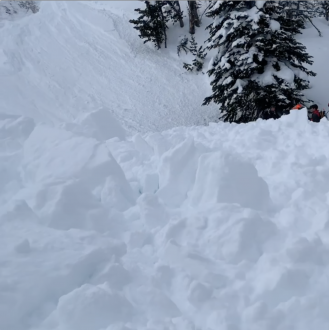 Riders triggered this slide on 2/28/21 near Red Canyon/Cabin Creek, north of West Yellowstone. Nobody