Good Morning. This is Ian Hoyer with the Gallatin National Forest Avalanche Forecast on Saturday, March 27th at 7:00 a.m. Today’s forecast is sponsored by Uphill Pursuits and Blitz Motorsports and Yamaha. This forecast does not apply to operating ski areas.

Big Sky picked up 3-10” of low density new snow, while other areas only received a trace-1”. Strong winds are out of the west and northwest, gusting 30-45 mph. Temperatures are in the teens and 20s F. Westerly winds will back off a bit today, only gusting into the 20s. Temperatures will rise into the 30s and 40s F. There will be a few lingering snow showers this morning before skies begin to clear.

Strong winds have drifted recent snow into deep drifts that can break under the weight of a skier or rider today. Alex was in the northern Bridger Range yesterday and identified these drifts as the chief concern going into the weekend (video). A small skier triggered wind slab near Big Sky yesterday is an example of what to look out for today and the sort of terrain where triggering a slide could be particularly hazardous (photo). Pay attention to the texture of the snow surface for visual clues to identify these drifts. Look for drifted pillows near ridgelines, beneath cornices, and downwind of trees or rocks. If you feel the snow surface stiffening under your feet, you’ve found one of these drifts and should stop to assess before proceeding into steep terrain. These drifts will be particularly deep and easy to trigger in areas near Big Sky with the biggest overnight snow totals.

On some slopes, beneath the recent snow is a thin layer of weak snow (called near-surface facets) that makes for a poor bond to the old snow surface. The distribution of this weak layer is spotty. Near Cooke City it appears to primarily be on west facing slopes, but that pattern doesn’t hold in other areas (Cooke video). Assume it’s on every slope until you prove otherwise by digging to look for it. There is also a small possibility that avalanches breaking in the upper snowpack could step down to the weak layers at the ground.

The strong spring sun is supposed to come out this afternoon, which in many places will moisten the new snow for the first time. Watch for the snow surface getting sticky and cohesive, with roller balls and pinwheels being clear signs that the conditions for loose snow avalanches are developing. Move to shadier slopes or out of steep terrain to avoid this issue.

Large avalanches are possible and the avalanche danger is MODERATE today.

On Monday, March 22, a skier in Colorado was caught and killed by an avalanche in the backcountry near Beaver Creek Ski Area (preliminary information and photos). Last Saturday in California, a snowmobiler died when he stepped off his sled, broke a large cornice, and triggered an avalanche below (details and photos). We are sad to hear of these losses. The US now totals 35 avalanche fatalities. 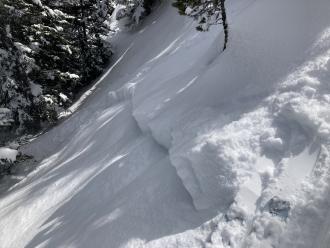 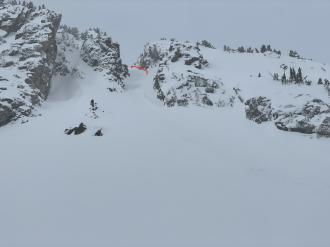 From obs: "On Friday, my partner and I went into Middle Basin with the objective 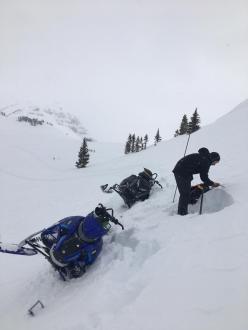