Good Morning. This is Dave Zinn with the Gallatin National Forest Avalanche Forecast on Tuesday, December 14th at 7:00 a.m. This information is sponsored by the Community Food Co-op, Montana Backcountry Alliance and Bridger Bowl. This forecast does not apply to operating ski areas.

In the last 24-hours, the Lionhead area, and the Southern Madison and Southern Gallatin Ranges received 8” of new snow, Cooke City got 4” and the mountains around Bozeman and Big Sky got up to 1”. Winds are 15-30 mph from the south to southwest and temperatures are in the 20s F. Today, temperatures will hover around 30 degrees F with south to southwest winds blowing 15-25 mph. Heavy snowfall will continue with 12-15” falling by morning in West Yellowstone and the Southern Madison and Southern Gallatin Ranges with 5-7” in the mountains near Cooke City, Big Sky and Bozeman.

The Gallatin National Forest Avalanche Center is issuing an avalanche warning for the Centennial Mountains outside Island Park, Idaho. The avalanche danger is HIGH on all slopes. Natural and human-triggered slides are very likely. A large amount of new snow with strong wind are creating unstable conditions over a wide area. Very dangerous avalanche conditions. Backcountry travelers should stay off of steep slopes and stay away from the bottom of steep slopes. Avalanches can be triggered from flat terrain. Steep slopes can avalanche far above and run into lower angled terrain. www.mtavalanche.com/forecast/centennials for more detailed information.

This week’s storm has a bull’s eye painted on the West Yellowstone area with Lionhead, and the Southern Madison and Southern Gallatin Ranges feeling the effects with 21” equal to 1.8-2” of snow water equivalent (SWE) since Saturday. Strong winds and another blast of snow today are creating dangerous avalanche conditions on all slopes. When we rode Lionhead on Monday, we found heavily wind-drifted slopes already struggling with the weight of the new snow. One large drift expressed this instability with a loud collapse or “whumph” (video). At the same time, skiers in the Taylor Fork triggered wind drifts on a test slope that broke as a small, but thick slab avalanche (photo). Continued snowfall throughout the day will increase the danger.

Careful snowpack evaluation, cautious route-finding and conservative decision-making are essential. The danger is rated CONSIDERABLE on all slopes.

Cooke City has received 15” of snow since Saturday equal to 1.5” of SWE with strong winds stripping some slopes and loading others. Last week, Alex and Ian found weak layers buried deeply in the snowpack (Cooke City video 1, Cooke City video 2). These weak layers have not produced avalanches or propagated in unstable test scores yet, and our primary concern revolves around steep slopes with the added weight of wind-loaded snow. Avoid wind-loaded slopes and dig down to assess whether deeper weak layers are nearing their breaking point as continued snowfall adds weight and stress to the snowpack.

With the exception of slopes loaded by the recent wind (wind video), the snowpack in the mountains around Bozeman and Big Sky is generally stable. Yesterday in the Bridger Range, we found some slopes stripped down to the dirt and small areas with drum-like wind-slabs. This weekend, climbers in the gullies of Hyalite observed shooting cracks in localized drifts and had them collapse under their feet (photo, photo, drifted Hyalite gullies video). We are finding weak facets on some slopes, but they will not be a concern until they are loaded with significant new snow (photo of weak snow in Hyalite, Bridgers video). The 5-7” in the forecast today is unlikely to tip the scales but watch for signs of decreasing stability as today’s snow adds up.

The avalanche danger is MODERATE on wind-loaded slopes and LOW on all others.

Get your avalanche brain ready for the season at one of the many classes listed on our education calendar, and list of upcoming events below. Don’t delay preparing and inspecting your avalanche gear. Get some tips from Dave Zinn in this Pre-Season gear check video.

Wednesday, December 15, 6-7 p.m. FREE Sidecountry Avalanche Awareness for Families (and Friends). In partnership with Bozeman Parks and Recreation at Beall Park.  A 1-hr avalanche awareness talk with an emphasis on “Sidecountry Terrain and Snowpack.”

Every Saturday near Cooke City, 10a.m.-3p.m. FREE snowpack update and transceiver/rescue training. Stop by for 20 minutes or more. At the Round Lake Warming Hut.

The Friends of the Avalanche Center are hosting the Virtual Powder Blast fundraiser. With only $2,500 left to go, help us reach the $65,000 goal. Your donations support free and low-cost avalanche education, beacon checkers at trailheads, beacon parks, weather stations, and GNFAC programs! 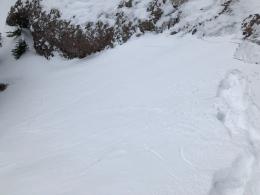 Sadly, on Saturday a group of skiers was caught in an avalanche in the backcountry near Crystal Mtn., Washington and one person was killed. Link to Article. Our deepest condolences go out to those affected by this tragic event. 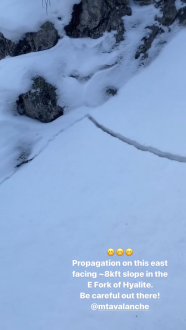 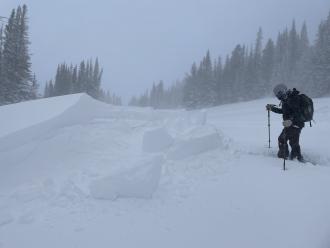 From obs: 12/12/21: "Heavy wind loading from gusty SW winds and recent snowfall. Made for

END_OF_DOCUMENT_TOKEN_TO_BE_REPLACED
Propagating cracks along top and bottom of windslab 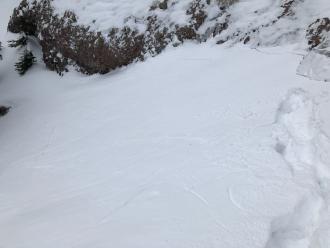