Good morning. This is Dave Zinn with the Gallatin National Forest Avalanche Forecast on Tuesday, February 1st at 7:15 a.m. This information is sponsored by World Boards and Highline Partners. This forecast does not apply to operating ski areas.

Temperatures this morning are in the single digits F above and below zero with 5-20 mph winds from the west to northwest. In the last 24 hours, the mountains around Big Sky and Bozeman received 5” of snow and the mountains south of Big Sky through West Yellowstone and Cooke City received 2-3”. Temperatures today will be in the low to mid teens F with 5-15 mph winds from the west to southwest. Periodic snow will bring another 2-5” by morning.

The mountains around Big Sky and Bozeman received 5” of low-density snow equal to 0.3” of snow water equivalent (SWE). The wind is transporting this snow into soft slabs where triggering an avalanche is possible. Small, loose snow avalanches on non-wind-loaded slopes will be relatively harmless except in technical terrain where they could be large enough to push you into or off obstacles.

Yesterday, the Big Sky Ski Patrol triggered isolated soft slabs up to 6” deep and loose snow avalanches. Expect more of the same especially as more new snow comes in today. Prior to yesterday’s storm, we observed weak snow at or near the surface across much of the advisory area. This weak layer resulted in a 1000’ wide avalanche and long-running loose snow sluffs on Saddle Peak one week ago (video and details). A natural avalanche near Big Sky last Friday is another example of wind-loaded terrain where instabilities are more likely (photo and details). Avalanches breaking deeply in the snowpack are unlikely, but it is worth assessing for isolated areas of instability. As Ian and Doug recently found, the entire snowpack in some of the lower elevation, shallower ski destinations got weaker during January’s high pressure (Mt Ellis Video, Wheeler Mountain Video).

Avoid steep slopes if you observe signs of instability such as recent avalanche activity, shooting cracks or fresh drifts of wind-blown snow. The danger is MODERATE on wind-loaded slopes and LOW on all others.

The southern ranges of the advisory area received 2-3” of light snow equal to 0.1 to 0.2” of SWE. Watch for signs of isolated instability especially at higher elevations or in wind-prone areas where small drifts could crack and avalanche. Any avalanche will likely be less than 6” deep except in isolated areas where recent weak layers enhance the danger as Ian explained from Cooke City last weekend (video). While weak layers at or near the snowpack surface are widespread across the southern portions of the advisory area, they will not be a widespread avalanche concern until they get loaded by more snow (photo, Cooke video, Lionhead video).

If you are traveling through avalanche terrain, assess the snowpack, limit exposure to one person at a time on steep slopes and be well practiced with the rescue equipment you carry.

Large, human-triggered avalanches are unlikely and the danger is LOW.

February 5th, King and Queen of the Ridge at Bridger Bowl. Come hike and ski with your friends for avalanche awareness and fun! Details below.

KING AND QUEEN OF THE RIDGE, FEBRUARY 5TH

Do you like to hike? Do you like to ski? Then the King & Queen of the Ridge is for you. Hike, ski and raise money for the Friends of the Avalanche Center in their 2nd biggest fundraiser of the year. Join the effort to promote and support avalanche safety and awareness! Fundraising prizes for top 5 individuals who raise over $500. No racing is necessary to compete for the fundraising prizes. Info is HERE. Race participants for the February 5th event must register separately with Bridger Bowl HERE. 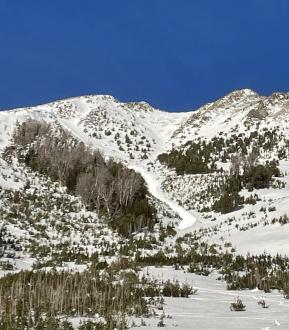 From obs. 1/29/22: "Avalanche appeared to have been caused by a breaking cornice on lookers 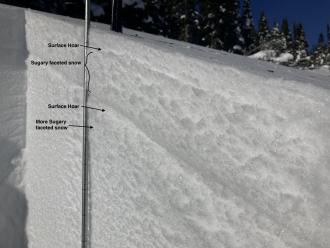