Good morning. This is Doug Chabot with the Gallatin National Forest Avalanche Forecast on Wednesday, February 9th, at 6:45 a.m. This information is sponsored by Blitz Motorsports and Yamaha and onX. This forecast does not apply to operating ski areas.

On Sunday, one snowmobiler in a group of four was caught and killed in a small avalanche on Ski Hill at the south end of Lionhead Ridge. I responded to the accident with Gallatin County Sheriff SAR and returned the next day to investigate the snowpack. We made a video explaining the event and will post a detailed report very soon. We also uploaded more pictures from our field investigation to the Avalanche Incidents page.

This morning there is no new snow. Under cloudy skies mountain temperatures are near 20F with west to northwest wind averaging 10-20 mph and gusting to 35 mph. The Bridger Range is windier with gusts hitting 50 mph. Scattered snowfall will begin later this morning and continue into tonight. Wind will remain a similar speed and mountain temperatures will rise to near freezing. By tomorrow morning the mountains will have 1-2” of snow.

Alex has been in Cooke City since Sunday after 12-14” fell; lucky boy. He and others noted natural and human triggered avalanches under the new snow where a thick layer (6+”) of weak snow (facets and surface hoar) continues to show signs of instability. Our Avalanche Activity List documents 9 events in one week. Yesterday, as Alex skied, he witnessed shooting cracks, a whumpf and another day of propagating test scores in his snowpits. His latest video is an instructive show-and-tell of avalanche concerns.

Before Friday and Saturday’s storm, stability was good and people were feeling comfortable getting into serious avalanche terrain. Today, not so much. Avalanches are possible on the same slopes that were stable a week ago. We have a significant weak layer that has 1.5 feet of snow on top of it. Any slope that has a wind-load will be especially worrisome. Change objectives and stay clear of avalanche terrain at the first sign of instability, like Alex did yesterday. The weak layer is not going away and slopes still need time to adjust to the added weight of the weekend’s snow. For today, the avalanche danger is rated MODERATE on all slopes.

The snowpack from the Bridger Range to West Yellowstone is generally stable. Most slopes have weak, sugary snow (and/or feathery surface hoar crystals) buried 18” under the surface. Without the weight of new snow this layer will remain dormant, but there are a few exceptions. Sprinkled throughout the forecast area are small, unstable slopes from wind drifting. Thicker, meatier drifts of snow could break on this weak layer. This is what occurred in Lionhead on Sunday. A snowmobiler triggered a small, shallow and very steep wind-loaded slope that carried him into trees and buried him (details). Even in a sea of stability there are a few shoals of danger lurking. There always are. A telltale sign of instability associated with wind-loading are cracks shooting out from skis or a sled. For today, given the lack of new snow and overall stability, avalanches are unlikely and the danger is rated LOW.

See our education calendar for an up-to-date list of all local classes. Here are a few select upcoming

February 11-12, Avalanche Fundamentals + Field Day in ENNIS is perfect as a refresher or an introduction to avalanches. We are introducing a new format with four pre-recorded lectures to watch at your convenience, a live question and answer session, and an in-person field day. Pre-register HERE.

On Sunday, one snowmobiler in a group of four was caught and killed in a small avalanche on Ski Hill at the south end of Lionhead Ridge. We made a video explaining the event and will post a detailed report very soon. We also uploaded more pictures from our investigation to the Avalanche Incidents page. 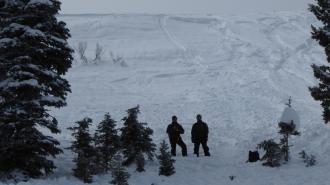 Crown of the avalanche on Ski Hill. The snow rangers in the photo are standing 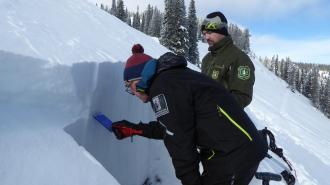 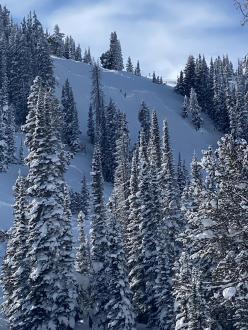 A group of riders snapped a photo of this avalanche on Sunday. The slide isn't 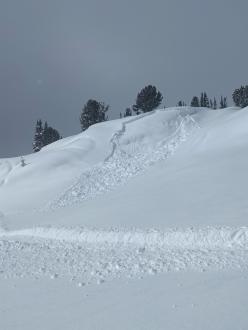 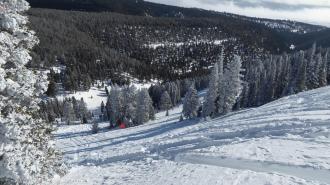