Good morning. This is Alex Marienthal with the Gallatin National Forest Avalanche Forecast on Saturday, February 19th, at 7:00 a.m. This information is sponsored by Cooke City Motorsports, The First National Bank of Gilbert, MN and Gaia GPS. This forecast does not apply to operating ski areas.

Since yesterday morning the mountains near Cooke City got 2” of new snow, near West Yellowstone got 1”, and elsewhere got zero. Wind has been west-southwest at 15-25 mph with gusts of 30-40 mph. Temperatures are teens to mid-20s F this morning. Today, temperatures will reach high 20s F near Cooke City and West Yellowstone and high 30s F near Bozeman and Big Sky. Wind will increase to 20-35 mph out of the west. Snow is expected late tonight and tomorrow. By morning, 1-2” are possible in the southern half of our forecast area with a trace to 1” elsewhere, and more falling through the day.

The mountains near Bozeman and Big Sky got 8-17” of new snow since Tuesday (0.6”-1.5” snow water equivalent (SWE)) which makes avalanches possible, especially where that snow was blown into thicker drifts by westerly winds. The last couple days we visited Hyalite (video), Buck Ridge (video), and the Bridger Range (video) where we saw natural avalanches that broke in the new snow on wind-loaded slopes (Buck photo, Divide photo, Bridgers details). Yesterday we intentionally triggered a couple small drifts from the ridgeline of Divide Peak (photos and details), and skiers in the northern Bridger Range found fresh slabs that cracked easily under their skis (details). On non-wind loaded slopes we did not see signs of instability like cracking or recent avalanches. However, with a foot or more of recent snow on some slopes it is still possible to trigger loose snow slides or slabs of new snow on any steep slope, wind-loaded or not. Wind and above freezing temperatures could contribute to decreasing stability of the new snow through the day. Carefully and continuously assess the stability of the new snow before riding steep slopes. Avalanche danger is MODERATE.

Near Cooke City a layer of weak snow is buried 1.5-2 feet deep on many slopes which makes it possible for a person to trigger large avalanches. Since Tuesday these mountains got a foot of snow (0.9” SWE) that has been blown into deeper drifts by west-northwest wind the last few days. These drifts of recent snow alone could avalanche and be large enough to bury or injure a person, or they could break deeper and larger on a buried persistent weak layer. Yesterday a natural avalanche of wind-drifted snow occurred on Scotch Bonnet mountain (details). Before riding on steep slopes, carefully assess the snowpack for wind-loading and buried weak layers, and consider the consequences of being caught in an avalanche. Today, large avalanches are possible and avalanche danger is MODERATE.

The mountains south of Big sky to West Yellowstone got 5-8” of snow since Tuesday (0.6” SWE) which was drifted into thicker slabs by strong westerly winds. These slabs are possible to trigger and could break wide and be large if they formed on top of weak layers near the top of the snowpack. Many slopes have weak snow near the surface, but avalanches are unlikely without a slab of wind-drifted snow on top. Today the avalanche danger is MODERATE on wind-loaded slopes, and LOW on all other slopes.

In this article, Beyond the beacon: Thoughts and gear for a safe backcountry experience, Dave Zinn recounts his recent backcountry accident and how being prepared made a difference. 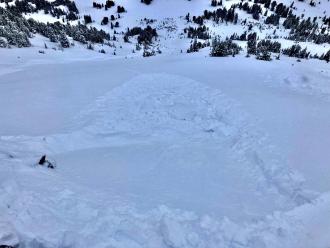 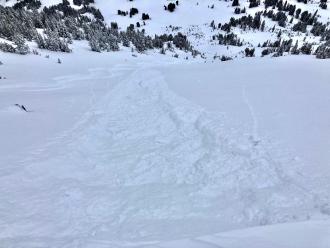 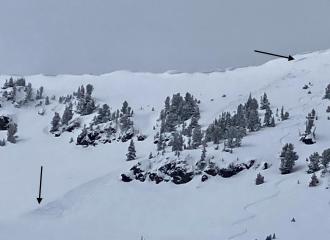 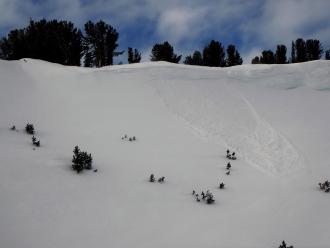