Good morning. This is Doug Chabot with the Gallatin National Forest Avalanche Forecast on Wednesday, February 23rd, at 6:45 a.m. This information is sponsored by Cooke City Super 8/Bearclaw Bob’s and Blitz Motorsports and Yamaha. This forecast does not apply to operating ski areas.

On Saturday a snow biker was killed in an avalanche on the south face of Miller Mountain near Cooke City. The accident investigation video is posted along with preliminary information and photos. Later today we will publish a detailed report.

Frigid temperatures continue with readings of -23F at 7300’ and -4F at 9000’. This 15-20 degree temperature inversion should last today under sunny skies. Easterly wind has calmed overnight to 5-15 mph. Today will remain cold, the wind will be light and tonight will be chilly, with lows of -10F. By tomorrow the polar weather should be gone.

The mountains around Cooke City are still exhibiting signs of instability that cannot be ignored. A deadly avalanche triggered by a snow biker on Saturday was followed by a large natural avalanche on the south face of Mount Abundance on Monday (photos and details). Also on Monday, near Round Lake a rider triggered a 200’ long avalanche on a short and steep slope that could have buried someone (photo and details). Avalanches are propagating far distances on weak, sugary snow about 2 feet under the surface. Yesterday, skiers had whumpfs and shooting cracks (details) in wind drifts south of town on Woody Ridge. Triggering avalanches remains possible. Turn around at the first sign of instability like cracking and collapsing. The weak layers are not healing, they are just becoming slightly more difficult to trigger without the weight of new snow or wind-loads. For today the avalanche danger is rated MODERATE.

In the mountains around Bozeman and Big Sky there are 2 avalanche concerns. The first is wind drifting from the east wind. Wind drifts are always a concern, but east wind is an unusual direction and atypical slopes are getting loaded (i.e. west facing terrain). Shooting cracks are a sign you are on a drift that could slide if steep enough. The second concern are loose snow avalanches big enough to knock you down and push you over cliffs. Alex and Ian saw this during their tour of the Throne in the Bridger Range on Monday (photo, video) and yesterday a skier saw large sluffs during a tour in Hyalite (details and photo). Wind is not loading slopes today, but yesterday they were. Triggering avalanches is still possible on wind drifts formed in the last couple days and the danger is rated MODERATE on these slopes. All other slopes have a LOW danger.

In the southern Gallatin and southern Madison Ranges along with the Lionhead area near West Yellowstone, there is weak snow buried 6-18” deep, but the snowpack is generally stable. In the absence of new snow or wind-loading avalanches are unlikely. There may be a few lone wolf slopes waiting for a trigger, but these are not numerous and the slides would not be very big or deep. During times of relative stability we still want to carry rescue gear, go one at a time into avalanche terrain and watch one another in case an avalanche gets unintentionally triggered. For today the avalanche danger is rated LOW on all slopes.

On Saturday a snow biker was killed in an avalanche on the south face of Miller Mountain near Cooke City. The accident site video is posted along with preliminary information and photos. 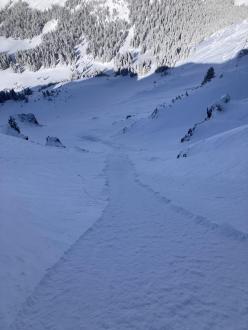 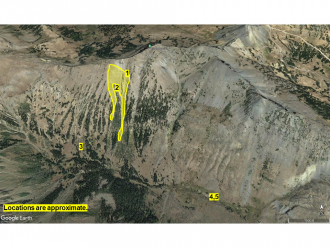 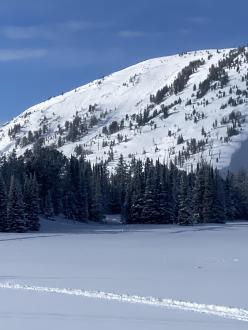 Riders saw a large avalanche on the south face of Mount Abundance on Monday. Photo