Since Friday the mountains near Cooke City got 13” of new snow, and near Bozeman, Big Sky and West Yellowstone got 4-6”. Temperatures reached mid 30s F on Saturday and high 20s F yesterday. Wind was west-southwest at 15-25 mph with gusts of 30-60 mph. Today under mostly sunny skies, temperatures will reach mid-40s F, and wind will be 5-25 mph out of the west-southwest. Wind will remain west-southwest through the week with periods of moderate to strong speeds. Temperatures will drop to the teens and 20s F most nights and during the day will reach mid-30s to low 40s F. Tomorrow there is a chance for 1-4” of snow with more possible Thursday night and Friday.

Clear skies and above freezing temperatures today, and maybe later in the week, will quickly get the new snow wet and make avalanches easier to trigger (video). Anticipate changing conditions and monitor the wetness of the snow surface. Plan to be off and out from underneath steep terrain that receives direct sunshine before it becomes unstable. If you see large pinwheels of snow on the surface or can make a snowball of moist snow, it is time to retreat to lower angle or shadier terrain.

Over the weekend recent new snow created dangerous avalanche conditions, especially where it was drifted into thicker, dense slabs by strong wind. We received reports of natural avalanches in the Bridger Range (photo) and Cooke City (photo) which broke during and immediately after the heaviest snow fell on late Saturday. On Saturday in East Rosebud Creek, outside our advisory area, five skiers from two separate groups were caught in a natural dry loose snow avalanche. Luckily, no one was injured. The avalanche became large as it entrained snow while it swept down the couloir they were climbing (details). Yesterday near Cooke City, skiers intentionally triggered a 4-16” deep slab of wind drifted snow (photo and details) as they descended a slope.

This week similar avalanches are possible which will involve the recent snow or snow that falls later this week. Watch for signs of unstable, wind-drifted snow and avoid steep slopes where you suspect it exists. Be especially cautious in terrain where even a small slab or loose snow slide would be deadly due to higher consequences, like potentially pushing you into rocks, trees or over cliffs. Before skiing or riding in steep terrain, dig down a couple feet and assess the stability of snow that fell over the last week. Avalanches could break on hardness differences within the recent snow, or on a hard melt-freeze crust buried below the recent snow. In isolated, colder areas, avalanches could break on weak layers 1-3 feet below the new snow.

Always follow safe travel protocols by skiing and riding with a partner, carrying a beacon, shovel and probe and exposing only one person at a time to avalanche terrain.

Bridger Bowl is closed, and backcountry conditions exist. There is no avalanche mitigation or ski patrol rescue. In case of emergency, call 911. Please stay clear of work areas, snowmobiles, chair lifts and other equipment. Without the daily avalanche mitigation efforts of the ski patrol, backcountry conditions now exist within the boundaries of Bridger Bowl (video). Commonly traveled routes such as the North Bowl Road and any slope steeper than 30 degrees are avalanche terrain (i.e. most of the Ridge and Schlasman’s terrain). Other groups above and below you may complicate principles of safe travel. 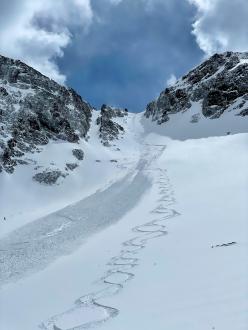 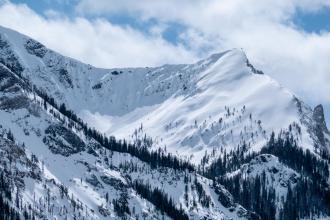 We saw this natural avalanche on the Fin that occurred overnight on April 17th. It was 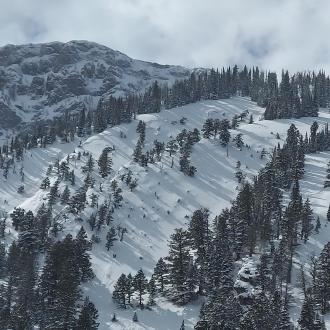