This is Ian Hoyer with pre-season avalanche, weather and event information from the Gallatin National Forest Avalanche Center on Thursday, November 10th. This information is sponsored by The Friends of the Avalanche Center and Yellowstone Club Community Foundation. Join them in supporting free and low-cost avalanche education, community outreach and avalanche center operations during the 2022 Powder Blast Fundraiser.

*Note: Bridger Bowl Ski Area is closed and there is no avalanche control or ski patrol services. Backcountry conditions exist. Workers are setting up for the season and making snow. Please stay clear of work areas, snow guns, chair lifts and other equipment.

Since Tuesday morning the mountains received 10-12” around West Yellowstone and Cooke City, and  1-4” near Big Sky and Bozeman. Strong east winds on Tuesday shifted west and south yesterday, calming to 10-15 mph with gusts of 25-35 mph this morning. Temperatures will remain chilly with highs only reaching the teens and 20s F through the weekend. Winds will remain moderate and generally westerly for the next few days. An inch or two of snow are possible around West Yellowstone today before conditions turn dry until at least the middle of next week.

The snow is starting to pile up and triggering an avalanche is very much a possibility today and through the weekend. Storm totals since Monday are around two feet near West Yellowstone and Cooke City, and around a foot near Bozeman and Big Sky. Strong winds from both the east and west have blown this new snow into deep, cohesive drifts that could avalanche today. Look for and avoid these wind drifts, as they are where you’re most likely to trigger a slide.

Yesterday, a skier triggered an avalanche near the summit of Mt Blackmore that broke 50 ft below him (photo, photo). It broke 10-18” deep, 150 ft wide and ran 600 vertical ft over cliffs. Thankfully no one was caught. Skiers at Bridger Bowl also got a small pocket to propagate in the new snow around 6” deep (details).

Take note - avalanche season is here. Travel is becoming easier with 2-4 ft of snow on the ground in many areas. This also means that avalanches can break deeper and wider. Travel in the backcountry like you would any day mid-winter or avoid steep slopes entirely. Avalanche rescue gear (beacon, shovel, and probe) and a partner are essential if you’re going into avalanche terrain.

Your observations are more important than ever this time of year as we get to know this season’s snowpack.

In the mountains near Island Park, snow is starting to pile up and triggering an avalanche is very much a possibility today and through the weekend. Strong winds have blown the new snow into deep, cohesive drifts that could avalanche. Take note - avalanche season is here. Travel in the backcountry like you would any day mid-winter or avoid steep slopes entirely.

The Friends of the Avalanche Center are hosting the Powder Blast Fundraiser. Your donations support free and low-cost avalanche education, beacon checkers at trailheads, beacon parks, weather stations, and GNFAC programs! The Friends of GNFAC launched an online GoFundMe campaign. Please consider a donation, and we look forward to having an in-person event again in the future.

Your field observations are hugely helpful as we build a picture of snowpack stability. Let us know if it was a beautiful day or snowy, deep powder, avalanches seen or just boring riding. Submit your observations on our new page or read them all here.

Crown and runout of skier triggered avalanche on Mt Blackmore. 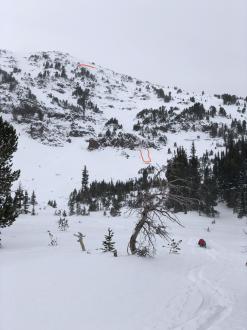 A skier remotely triggered an avalanche on Mt Blackmore (11/9/22).

From email: "I ski cut

END_OF_DOCUMENT_TOKEN_TO_BE_REPLACED
Crown of avalanche remotely triggered by a skier on Mt. Blackmore.

A skier remotely triggered an avalanche on Mt Blackmore (11/9/22).

From email: "I ski cut 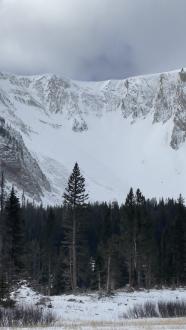 While traveling up the Fairy Lake road, we observed the aftermath of an avalanche in