Good morning. This is Dave Zinn with the Gallatin National Forest Avalanche Forecast on Tuesday, November 29th at 7:00 a.m. This information is sponsored by Werner Wealth Management (Advisors with DA Davidson), the Community Food Co-op and Bridger Bowl. This forecast does not apply to operating ski areas.

*Note: Bridger Bowl Ski Area is closed and there are no avalanche control or ski patrol services. Backcountry conditions exist. Please don’t ski over hoses and power cords, stay off chairlifts, and give snowcats and snowmobiles plenty of room.

This morning, mountain temperatures are in the single digits above and below zero F with 5-10 mph winds from the west to northwest. There is no new snow. Today, temperatures will peak in the single digits above zero F with 5-15 mph wind from the west. The southern portions of the advisory area will get a trace of new snow tonight as the leading edge of this week’s storm moves into the area.

The mountains of Southwest Montana received 6 to 13” of snow last weekend. Strong winds on Sunday created unstable drifts on many slopes. Skiers in the Bridger and Northern Gallatin Ranges triggered avalanches breaking 6 to 12” deep on wind-loaded slopes, with one failing nearly 100’ wide (avalanche activity log). On Sunday, the Big Sky Ski Patrol triggered avalanches 12-18” deep on similarly loaded slopes within the ski area boundary during their morning work runs. Yesterday, my partner and I found a weak layer of feathery surface hoar and sugary facets buried one foot deep at Lionhead Ridge and triggered five loud “whumphs” on low-angle slopes, a sure sign of instability (video). We will assume this layer is widespread until proven otherwise. Slopes with this weak layer will stabilize more slowly than others.

Additionally, on Sunday, the BSSP triggered a large avalanche that broke two and a half feet deep on weak layers near the ground (details and photos). Similar avalanches on Hyalite Peak ten days ago and a natural avalanche earlier this week at Big Sky point to a trend of weaker snow on high-elevation north-facing slopes.

Today, carefully evaluate the snowpack for signs of instability such as “whumphs,” shooting cracks or, the big one, recent avalanches. Dig down and test for instabilities in the upper couple of feet of the snowpack. Remember that we gather this information to turn us around, NOT to prove stability and move us forward. Travel in terrain that avoids steep slopes or minimizes the consequences of mistakes.

A major storm is set to impact the mountains around West Yellowstone and the southern portions of the advisory area starting tomorrow. The avalanche danger will rapidly increase if this storm comes to fruition.

The mountains around Island Park received 13” of snow last weekend, with strong winds on Sunday loading slopes with unstable drifts. Avalanches breaking 6-18” deep on weak layers buried below the recent snow and drifts are possible. Watch yesterday’s video from nearby Lionhead Ridge for a further explanation of these conditions.

Carefully evaluate the snowpack for signs of instability such as “whumphs,” shooting cracks or recent avalanches. Dig down and test for instabilities in the upper couple of feet of the snowpack and travel in terrain that avoids steep slopes or minimizes the consequences of mistakes.

A large storm during the second half of the week will rapidly increase the avalanche danger.

The Friends of the Avalanche Center are hosting the Powder Blast Fundraiser. Your donations support free and low-cost avalanche education, beacon checkers at trailheads, beacon parks, weather stations, and GNFAC programs! The Friends of GNFAC launched an online GoFundMe campaign. Please consider a donation, and we look forward to having an in-person event again in the future. 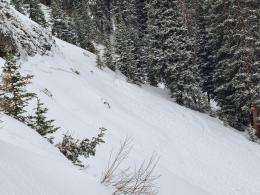 Your field observations are hugely helpful as we build a picture of snowpack stability. Let us know if it was a beautiful day or snowy, deep powder, avalanches seen or just boring riding. Submit your observations on our new page or read them all here. 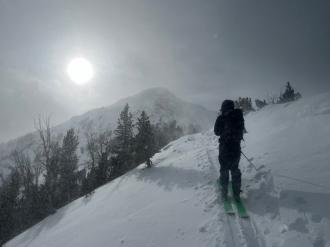 Toured up to the NE shoulder on Mt. Blackmore yesterday. Winds were strong and variable 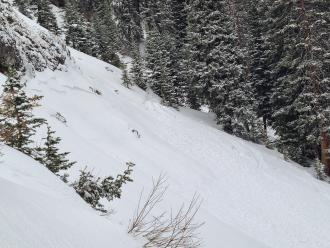 From BSSP Observations: "A wind slab triggered near the top of Cold Springs ran down