Good Morning. This is Alex Marienthal with a spring snowpack and weather update on Monday, April 8th. The Gallatin National Forest Avalanche Center has stopped issuing daily avalanche forecasts for the season. We will issue weather and snowpack updates on Monday and Friday mornings for most of April. This bulletin does not apply to operating ski areas.

***Bridger Bowl is closed for the season and did not open today due to heavy rain and High Avalanche Danger. Backcountry conditions exist and there is no avalanche hazard reduction or ski patrol services.***

Since yesterday the snow line has been around 8,000’ and the mountains received 0.5 to 1.2” of water. This equals up to one foot of snow at higher elevations (snow water equivalent). The highest amounts are near Cooke City and the Bridger Range (1.0-1.2” SWE). Elsewhere got about half (0.5-0.7” SWE). Yesterday wind was 30-55 mph out of the southwest to west with temperatures in the 30s F.

Today temperatures will remain in the 30s F, and by Wednesday temperatures will cool to highs in the 20s F and lows in the teens F. Today and tomorrow wind will be 20-30 mph out of the west to southwest, and wind will shift north-northwest late Tuesday and Wednesday. Heavy precipitation will continue Tuesday through Wednesday and the snow level will drop from around 8,000’ to near 6,500’ as temperatures cool later in the week. Higher elevations are likely to receive 2-3 feet of snow by Thursday morning.

Wind and precipitation, whether rain or snow, create heightened avalanche conditions. The storm just began yesterday and skiers triggered small slab avalanches in Beehive (details) and near Cooke City (details). Avalanches will grow in size and likelihood as more snow and rain falls. Dangerous avalanche conditions will develop today and through the week. Be conservative. Avoid steep slopes and be cautious of travel underneath steep slopes. See below for general spring travel advice.

We will update our weather and avalanche log daily through April. It is a valuable resource for backcountry travelers through winter and spring. If you have any avalanche observations, please share them with us to include in this database. Contact us via our website, email (mtavalanche@gmail.com), phone (406-587-6984), or Instagram (#gnfacobs).

Spring weather can be highly variable and create a mix of avalanche problems to watch out for. Snow conditions and stability can change drastically from day to day or hour to hour. Anticipate rapid change and plan accordingly. Abundant snowfall over the winter with more spring snow to come makes avalanches possible into summer.

Spring storms are notorious for depositing heavy amounts of snow in the mountains. Even with a deep and generally stable snowpack throughout the advisory area, heavy and rapid loads of new snow will decrease stability. The main problems to look out for are avalanches breaking within the new snow, wind slabs, and loose snow avalanches. The likelihood of triggering an avalanche spikes during and immediately after snowstorms. New snow instabilities tend to stabilize quickly, but it’s a good idea to give new snow a day to adjust before hitting big terrain. New snow instabilities can be difficult to assess, and spring storms bond to old snow differently across aspects and elevations. Conservative terrain selection is essential during and immediately following storms. Wind loaded slopes and slopes steeper than 35 degrees should be avoided for 24-48 hours after new snow and wind.

New snow can quickly change from dry to wet on a spring day, and stability can decrease rapidly with above freezing temperatures or brief sunshine. New snow may bond well early in the morning, and then easily slide later. Wet loose slides are likely during the first above freezing temperatures or sunshine immediately after a storm. Anticipate changes in snow stability as you change aspect or elevation, and over the course of the day. An early start is always an advantage. Be ready to change plans or move to safer terrain at the first signs of decreasing stability.

We will issue weather and snowpack updates on Monday and Friday mornings for most of April, and update our weather log daily. 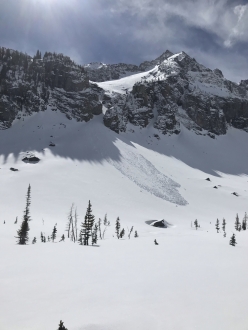 Natural wind slab in the Crazy Mtns. Photo: A. Vadis 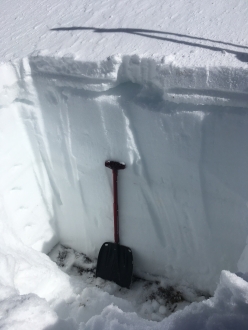 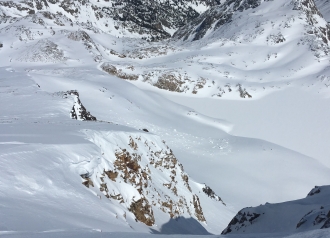 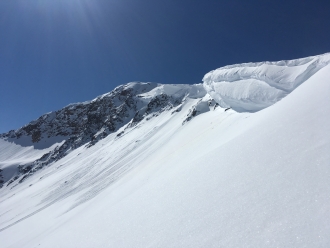