Since Monday, the mountains have received 1-1.5 ft of new snow. Winds have been strong and shifting, including some unusual east winds. Skies stayed mostly cloudy and high temperatures stayed below freezing. This weekend, skies will remain mostly cloudy, high temperatures will be a few degrees warmer (but still unseasonably cool), and snow showers are possible (particularly on Saturday night). Total accumulations will likely be only 2-4” by Monday.

A cold spring storm this past week brought a return to wintery riding conditions and the attendant avalanche concerns. This weekend won’t be as bitterly cold, but with cloudy skies and temperatures generally remaining below freezing, dry snow avalanches will remain the primary concern.

The issue you’re most likely to encounter are avalanches breaking in the new and wind drifted snow. As the storm rolled in on Monday, a skier in the Bridger Range triggered a small slab in the new snow on a small slope (photo). With substantial storm totals since then, larger and more dangerous slides are now possible. Watch for stiff, punchy feeling slabs and cracks shooting out in front of you as signs that you’ve found a slope where you could trigger a slab avalanche. Winds have blown from almost every direction over the past few days, so keep an eye out for wind loading in unusual areas. If you don’t see obvious signs of instability, dig down to check the interface between the new and old snow (and on cold, shady slopes dig a bit deeper to look for persistent weak layers that may still lurk another 1-3 ft deeper).

A quick break in the clouds or temperatures rising a bit higher than expected would add wet loose sloughs to our list of concerns. The mid-April sun is intense, it’ll only take a few minutes of direct sunshine to dampen and destabilize the snow surface. If the new snow is getting warm and feeling sticky, be on alert because you could trigger a loose wet slide.

Continue to follow safe travel protocols by skiing and riding with a partner, carrying a beacon, shovel and probe and exposing only one person at a time to avalanche terrain.

A Note on Bridger Bowl: Without the daily avalanche mitigation efforts of the ski patrol, backcountry conditions now exist within the boundaries of Bridger Bowl (video). Commonly traveled routes such the North Bowl Road and any slope steeper than 30 degrees are avalanche terrain (i.e. most of the Ridge and Schlasman’s terrain). Other groups above and below you may complicate principles of safe travel.

Bridger Bowl is closed, and backcountry conditions exist. There is no avalanche mitigation or ski patrol rescue. In case of emergency, call 911. Please stay clear of work areas, snowmobiles, chair lifts and other equipment. 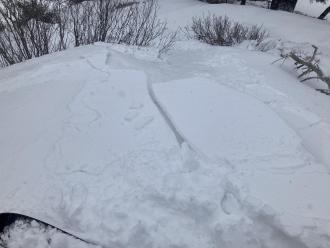 From Obs: "Small wind slab on the ridge between Bridger Gully and North Bowl. Only 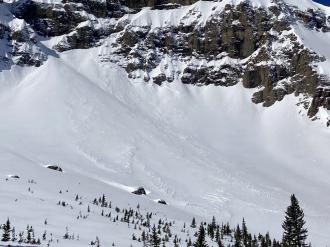 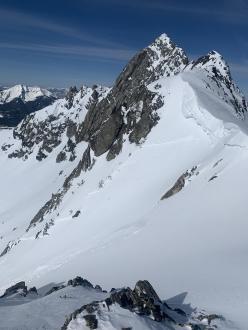 From obs 4/7/22: "We observed a small cornice triggered avalanche (R1-D1.5) from a wind-loaded gully