From e-mail "...Surprisingly supportive trailbreaking. Isolated collapsing both low in Bacon Rind creek, and ascending under Ernie Miller. One notable whumph at 9200' near saddle, we could hear sympathetic whumphing into the distance. Triggered from a thin spot near a tree.

Numerous older slides on the lesser angled, SE and SSE asp of Ernie Miller, as well as Northerly asps of  White Peak and BTL areas at the head of Bacon Rind creek.

One small slide on a N asp at head of Bacon rind creek, elev 8750,  had a crisper look than most of the others observed, suspect more recent. Not a big pocket but indicative of what might still be out there waiting for a trigger, given the fact that we are still observing collapses even this long after significant loading. Photo attached.

...probing at 8300' in a sheltered open low angle meadow, E asp,  found a mighty 80cm. Same setup described elsewhere in the area, about 10cm DF  which is faceting out,  capped by SH 3-5mm, overlying 25cm or so 1F slab, overlying very weak FC." 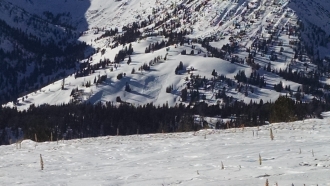