"At around 11 we ascended the slope north of sheep mountain and dug a pit at around 10,300’ on a NE aspect. Our pit was unresponsive. We skinned up to the summit of sheep mountain and dropped into the ENE spines directly off the summit. 3 turns into the slope, the entire 40° slope I was skiing propagated 12-18” deep and 250’ wide. I tried traversing out to skiers left to a clean slope but that slope then propagated even deeper, 18-20” and another 150’ wide. Once the larger slab started pulling my tips down I tried to point my skis downhill to gain some control and steer off the slope. Near the bottom of the face I had traversed onto there was a couple rocky outcroppings that I had to turn around, and the force of the liquid soft slab took me off my feet. I deployed my airbag pack, got hit with a couple waves of snow, and ended up on top with my skis and upper body/airbag above the snow. My partner above me had eyes on me for the entirety as well as a large group of sledders nearby, but it was still a scary experience. The bed surface was a hard crust that was not as obvious on the slightly more north aspect." 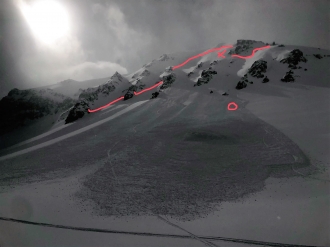 A skier unintentionally triggered these avalanches on Sheep Mountain outside of Cooke City. The skier