1. When approaching the base of Mt. Blackmore this morning at roughly 8:45am we observed strong swirling winds at higher elevations (summit of Blackmore and the Elephant/Blackmore Saddle). The winds we observed were primarily loading snow onto E and SE facing aspects. Furthermore, we witnessed four naturally triggered avalanches over a twenty minute span. All slides appeared to be D1/D2 on E and SE aspects and, seemingly, restricted to the newly loaded snow.

2. My partner and I climbed Zach Attack today. We intentionally triggered numerous size 1 wind slabs in the gully approaching the climb, which has slopes up to 35 degrees. These slabs were between 5 and 15 cm thick, up to 5m wide, 4F in hardness, touchy, and failed on lower density new snow. Although none of them ran more than 20m in this terrain, it would be a different story on steeper slopes, and if you were in an exposed position they had enough mass to push you around. Strong down and cross-slope winds formed these slabs at and below treeline, while the more alpine terrain of the climb itself was scoured.

3. Skied up in the main drainage of Hyalite today. Triggered some small wind slabs and propagating cracks. We backed off our main objective (a north facing couloir) because of these red flags and multiple crown lines on the same aspect and elevation. 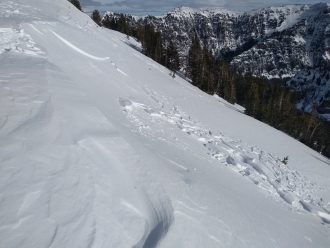 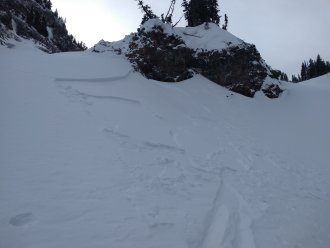 This slide was triggered up Hyalite from 100' away. It was a wind loaded slope 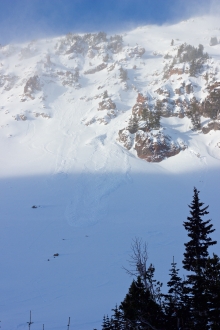 When approaching the base of Mt. Blackmore this morning at roughly 8:45am 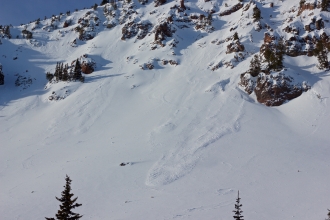 When approaching the base of Mt. Blackmore this morning at roughly 8:45