Knowing there was one party of two ahead of us, we continued to 45.434716, -110.94124 when they triggered slide above. It ran through one of the avalanche paths behind us, that we had crossed. We whooped to see if someone was the trigger and if they were ok, they yelled back all was ok. Our mistake was assuming the party ahead was taking, what we consider to be, the standard route up Flanders, not the subtle ridge that we figured was loaded by the month of west/sw winds We were wrong and were traveling below them but still were traveling in the older trees and not in slide paths, yet another example of why you follow protocol. Anyways I took a bunch of pics. Pin on map is about where they triggered it." 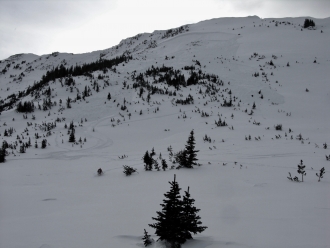 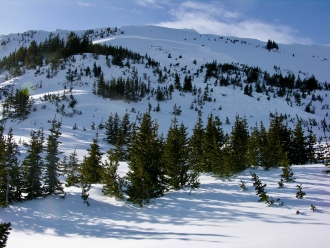