"Quick Obs from a tour up to the skiing just south of Flathead Pass [2/17/2020]. We headed that direction for some low-angle protected tree skiing and, instead, found evidence of a widespread natural avalanche cycle from 2~3 days ago.

- Crowns topped out around 8000’ with large amounts of hanging snow (on steep slopes) above. Interestingly, the crowns connected down slope as low as 7800’ and jumped from tree to tree along convexities. The avalanches’ crowns ranged from 100’ wide to over 500’ wide.

- The avalanches failed on 4F- 1.5mm facets above the Thanksgiving crust, which was substantially harder than I have seen in the southern Bridgers.

- The avalanches stepped down to well-developed depth hoar (below the crust) in a few locations.

- The average crown depth was ~140cm where we felt safe looking (near bottom of crown) but was significantly more shallow near some trees.

- Conducted a quick crown profile and some tests. The standout results are PST 25/120 END x3 (we conducted the PST at a spot where the weak layer was buried 120cm deep) on the persistent weak layer with no notable results in two separate location ECTs and additional deep tapping…).

- The debris piles extended to previous old-growth maximums (extending the path of at least one avalanche) and had many snapped trees up to 10” in diameter deposited within." 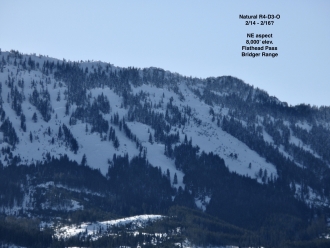 This natural avalanche broke 3-5' deep on weak snow near the ground, estimated sometime between 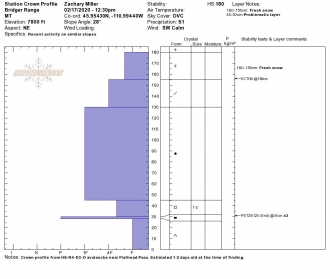